Majority of Smartphone Users are Tired of Upgrading their Handsets [Survey] 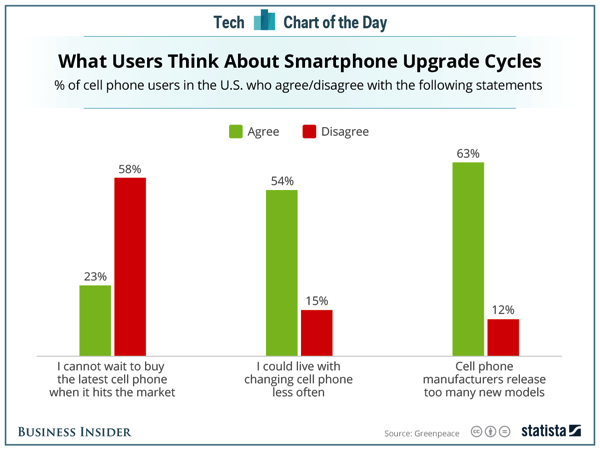 With Apple expected to launch the ‘iPhone 7’ next month, reportedly featuring minor upgrades such as an improved camera, a slightly thinner chassis and the lack of a 3.5mm headphone jack, it appears to be quite hard to get excited about Apple’s next flagship phone. However, a new chart by Statista (via BusinessInsider) highlights that a boring ‘iPhone 7’ might not be the worst thing for smartphone shoppers.

Citing results from a survey conducted by Greenpeace, the chart shows that most phone users in the U.S. are a bit fatigued with how frequently they upgrade their handsets. More than half of its respondents say they could live with changing phones less often, for instance.

“Now, it shouldn’t surprising to see a Greenpeace study incentivizing companies to fight e-waste, and none of this will help iPhone 5s owners hoping for a big upgrade this fall. Still, if phone makers taking it slower helps their devices last longer, that might not be the worst thing for everyday people”.

It is now being widely speculated that the iPhone will move to a 3-year upgrade cycle, saving the best improvements for next year’s device.