A new report from mobile analysts firm App Annie released this week shows that smartphone users are spending more time in apps as compared to previous year, launching an average of at least 9 apps per day (via TechCrunch). On monthly basis, users access over 30 apps on average, which is roughly one-third to one-half of the apps users have installed on their smartphones. 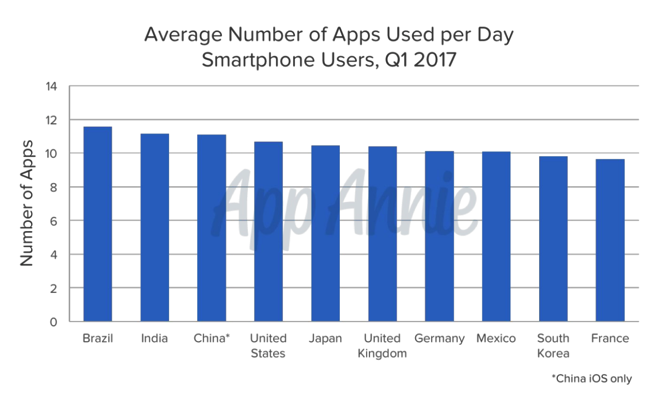 Time spent in apps has also increased over the past two years, App Annie noted. Today, users in the U.S. spend an average of over 2 hours and 15 minutes in apps every day, which amounts to over one month out of the year. In South Korea, Brazil, Mexico and Japan, that number is even higher, with users averaging around 3 hours daily.

In Brazil and Mexico, half user time was in social and communication apps categories, while in South Korea and Japan, games accounted for 25 percent of usage.

App Annie’s report shows that dating and productivity apps were launched the most, with the highest number of sessions per day at four.