A brand new iPhone tweak called SMS+Â (SMSPlus) has just gone live in Cydia store. As the name implies, it Â is an SMS messaging tweak that brings all the missing features to the iPhone’s native Messages app, which in fact is the best thing about it unlike iRealSMS or BiteSMS which both install and work as separate applications. The tweak integrates seamlessly with the stock SMS app, adding to it those functionalities you won’t ever be able to stay without after having tried them. 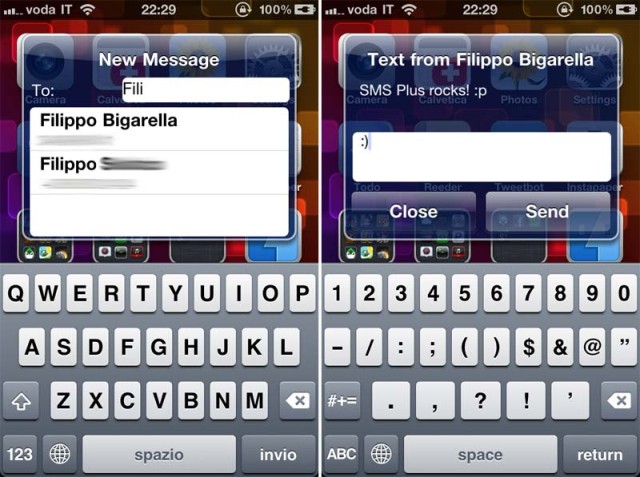 SMS+ allows you to quickly reply to an incoming sms without leaving the app youâ€™re using, or even bring up (via an Activator gesture)Â a new windowÂ where you can compose a new message, choosing the address from your contacts. It also includes a â€œLaterâ€ feature, which you can use to keep a message unread to read it later (an icon inÂ the StatusÂ Bar will remember you that itâ€™s there).Â You can also choose toÂ make yourÂ iPhone â€œspeakâ€ an incoming message, maybe when youâ€™reÂ drivingÂ or you canâ€™t look at your iPhoneâ€™s screen.

Like many other Cydia tweaks, SMS+ will not add any new icons to the homscreen once installed. All the required configuration can be done via the iPhone’s Settings app.Â You can grab it for $1.99 via Cydia Store now!

If you’ve already tried it, do share your experience with us in the comments section.