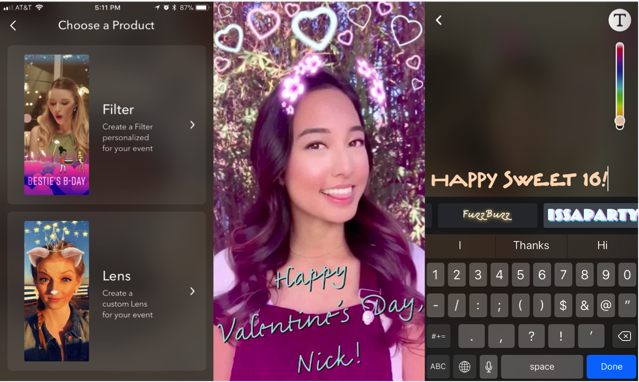 Expanding its on-demand geofilter program, Snapchat has today announced the launch of new Custom Lenses by combining combining augmented reality (AR) with your customizable captions, with prices starting at US $9.99. According to TechCrunch, these lenses allow users to make temporary, geofenced AR effects that people can add to their Snaps at a special event.

Available now in the U.S. on the web and in iOS app’s settings menu, Snapchat’s new Create-Your-Own-Lens maker will soon be rolled out in Canada and globally, as well as on Android. Users can choose from 150 templates to add animal ears, sparkles or the Snapchat dancing hot dog to their face.

They can then add a custom caption like “Happy Birthday, Josh!” using Snapchat’s new fonts, including Brush, Italic, Glow, Gradient, Rainbow, Fancy and Old English. After that, they can select the geofence where the lens will be available on a map from 20,000 to 5 million square feet, select when it will be available, and pay depending on how long and widely it’s available.

“Snapchat tells me the pricing is designed to be both affordable enough for the masses so custom lenses generate revenue, and to deter spam and flippant use of the platform. For example, if you wanted a Custom Lens available for a day in all of New York’s Central Park it would cost $1,182. A single block in San Francisco’s Mission District for a day would cost $92.

But the real opportunity is for Snapchat to become the most unique and fun way to share from special occasions. It hopes that if you equip guests with a pre-made Custom Lens, they’ll use it instead of fiddling with creating their own special effects on competing apps like Instagram.”

It must be noted that developers who want to design or code their own AR experience must use Snapchat’s Lens Studio instead, which was launched just over a month ago.