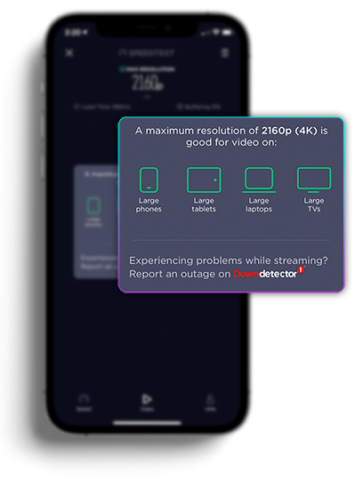 In today’s announcement, the company specified that while the service typically checks general connection metrics like maximum download and upload speeds and latency, the new test is focused specifically on video. It attempts to stream at a variety of resolutions, and then measures load times and buffering.

As Ookla explains, the video test “plays an actual video to specifically measure the performance of video streaming on your network at any time,” which is necessary “because video traffic cannot be simulated across a network.” The video runs through a variety of resolutions, up to 4K, to judge which resolution is best given your WiFi’s capabilities.

“Taking a Speedtest will let you know whether you’re getting lower than expected network bandwidth needed to stream your video. If your video test results reveal that you are frequently not able to stream well, you can use your video test history to advocate for yourself when talking to your provider,” the company wrote in the blog post.

You can find Speedtest’s new streaming analysis feature at the bottom of the screen within the app. Just click “Video” and hit the giant yellow play button in the middle. A video of what appears to be fiber optic cables plays throughout the test, which you have to leave up and running for it to complete. In the end, it’ll give you an assessment of your network’s streaming situation.

Video testing is currently part of the Speedtest app on iOS and the company said it will be available on more platforms soon.

Google announced on Thursday it will be shutting down Stadia, its cloud gaming service, in January 2023. The announcement took many in the gaming community by surprise, but it wasn’t an unexpected one. “While Stadia’s approach to streaming games for consumers was built on a strong technology foundation, it hasn’t gained the traction with users that […]
Gary Ng
28 mins ago