Thanks to Sphero, you don’t have to live in a galaxy far, far away to own your very own astromech droid. On Force Friday the wraps were taken off the companies newest creation, BB-8. He’s an app controlled robot based on the new astromech droid in the upcoming Star Wars movie The Force Awakens. My family has been testing this little droid for a couple of days, and having a blast doing so.

We’ve only seen brief glimpses of BB-8 in The Force Awakens trailers, but already he’s become somewhat of a fan favourite. Inside the box you’ll find BB-8’s spherical body, his head that attaches to the body magnetically and his charging station.

You will need to download the free BB-8 App and pair the droid with your mobile device. One complaint I do have is Sphero doesn’t provide very many instructions. While it is pretty straight forward, it would be nice to know what the all the flashing lights on BB-8 or his charger mean. For instance, while I was pairing BB-8 with my iPhone for the first time, I had to update the firmware. It got to 100% and then the screen on my phone went all white. I left it for probably 30 seconds and nothing happened so I quit the app. I re-paired again, and again it did the same thing. This time I let it sit for several minutes and eventually it finished. 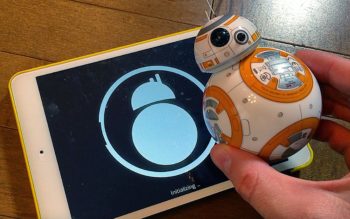 Once your device and BB-8 are synced, it’s time to start having fun. You control your droid using the on-screen joystick. While it can be tricky to get used to at first, you’ll eventually get the hang of it. You’ll also notice what looks like a holographic BB-8 beside the joystick. By sliding your finger over it, you’ll notice a blue light coming from your droid. You want to have that blue dot pointing at you. It keeps BB-8 oriented so that the direction you want him to go is actually the way he rolls.

There’s also some pre-programmed movements within the app, including getting BB-8 to do a figure 8, or move in a square pattern. The app also features some personality functions to make BB-8 speak and move his head around. You can also control BB-8 with your voice, although the commands are limited. You can get him to go explore his surroundings, ask how he’s feeling, or my favourite, yell “It’s a trap” and watch him speed off.

You don’t always have to be in control of BB-8. If you put him into patrol mode, he’ll explore his surroundings on his own. That includes bumping into things and getting stuck. But don’t worry, BB-8 is pretty durable, plus he’s not too fast, so when he does hit something he’s not going to break. Although his head does pop off from time to time, it just pops back on magnetically. But do be careful, because BB-8 doesn’t have any awareness to stairs or edges. So there will be no stopping him from taking a trip down the stairs or a plunge off a table. 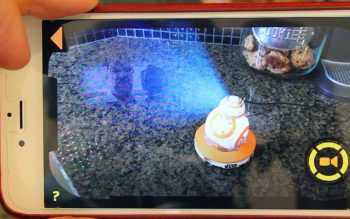 Another cool option is Messages. You can record yourself using your mobile device’s front facing camera, and then have it projected by BB-8 as a hologram. Ok, so it’s not a real hologram, but it’s still pretty cool. It’s a holographic projection on your mobile devices screen, but it does look as though it’s being projected from BB-8.

BB-8 isn’t without a few negatives. He is prone to picking up some debris off the floor. It really builds up on the underside of the head. But it’s nothing a quick wipe down doesn’t fix. And you can’t ignore the price. Here in Canada it retails for $189.99. While it’s pretty steep, the price is somewhat offset by the hours of fun you get out of BB-8. My kids love playing with BB-8. They thinks it’s fun to watch him roll around bumping into objects and listening to his beeps and squawks. 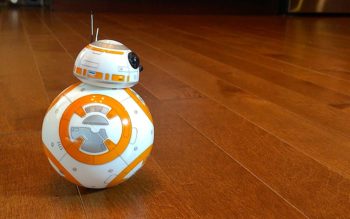 Overall, BB-8 is awesome. I have no doubt this is going to be one of the hot toys this Christmas, especially once BB-8 makes his big screen debut in December. BB-8 really is the droid you’re looking for, but it could be tough getting your hands on him. He’s sold out in most stores.

BB-8 is easily one of the coolest Star Wars toys ever and a must for any Star Wars fan.

Spotify is launching a new Home experience that includes feeds for both Music and Podcasts & Shows, making it easier for listeners to scroll through the type of content they’re looking for. The updated Spotify home screen will make the experience more personalized while allowing users to dig even deeper into their recommendations. In the...
Usman Qureshi
3 hours ago