Spotify wants users to be able to find a Canadian equivalent of their favourite artist, which has resulted in the creation of a web app called “Listen Like a Canadian”.

All users have to do is enter an artist on this page and the result will “Canadify” a playlist of Canadian artists, according to the Financial Post:

“Our goal with Spotify Canada is to integrate seamlessly with the listening needs of Canadians,” said the company in the press release accompanying the web app’s release. “[The app] can lead to some interesting listening and certainly shows the range and depth of great music coming from Canada.”

According to this ‘Canadify’ tool below, if you like 2pac (RIP) and want to listen like a Canadian, the equivalent sound would be music from Kardinal Offishall or Drake (who ‘started from the bottom’–on TV–as the infamous Degrassi High teen in a wheelchair). 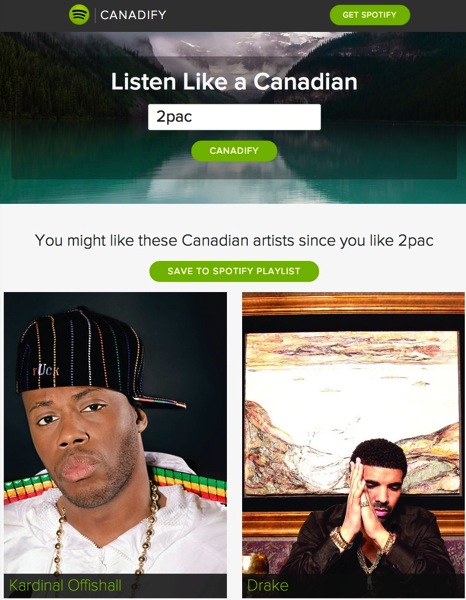 Spotify recently launched in Canada, offering a music library of over 20 million songs for the price of $9.99 per month. Anyone using Spotify right now?