Spotify is testing a revamped version of its Car Mode, a feature that changes the app’s interface to make it safer to use while driving. 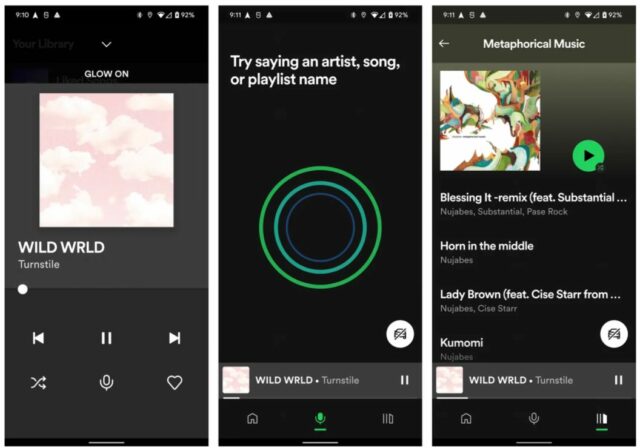 Spotify is one of the most popular music streaming services available, which is why it was surprising that it decided to discontinue the Car View feature from the platform’s smartphone app a few months ago. When Spotify removed the feature, there was little information about when or if the streaming service would offer another option.

While Car Mode was on, the display would be stripped down to the bare essentials like the playback controls and the song information. This way, you won’t be distracted by a busy interface.

Yesterday, 9to5Google published an article on a new Spotify Car Mode that enables when connecting a user’s phone to their vehicle’s head unit via Bluetooth. Once connected, the Spotify app prompts the user to tap on the car button in the lower right corner of the screen. The new Car Mode presents a simplified playback screen and something largely missing from the previous Car View option — search.

In Car Mode, you can actually navigate through the music you want to listen to rather than being restricted to the player’s view. Albums sit in a large grid above the player to keep the interface from being cluttered.

As for the actual player, it has a similar look to the previous Car View. However, in Car Mode, the player contains playback controls and song information, as well as like, shuffle, and voice search buttons. Rounding it off, Car Mode prominently displays the album art.

The new Car Mode is currently in “test drive” mode, meaning that things can change and the feature may not be available to everyone for a while.

Apple CEO Tim Cook confirmed on Tuesday the company will purchase chips made in the U.S., built at Taiwan Semiconductor Manufacturing Company’s (TSMC) Arizona factory. Cook spoke at an event in Arizona today ahead of President Joe Biden. “And now, thanks to the hard work of so many people, these chips can be proudly stamped […]
Gary Ng
48 mins ago