Spotify Rolls Out Podcast Monetization Tools for All Creators

Spotify has today announced the launch of its new monetization tools for all creators with Paid Subscriptions, Spotify’s Open Access Platform, bringing independent creators into the Spotify Audience Network. 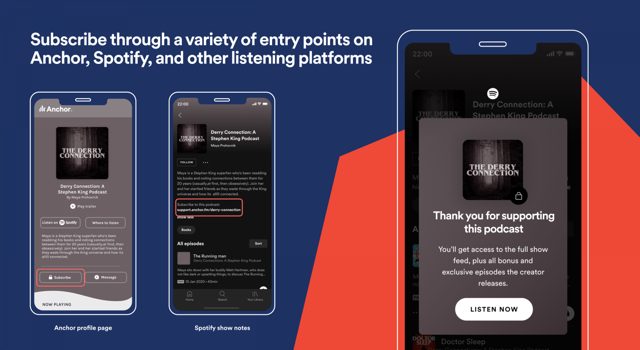 “Today, we’re rolling out a paid subscription platform for podcasters that gives them maximized revenue, wide reach, and discoverability,” said the music streaming giant, noting that the program will start rolling out in the U.S. today and will expand in Canada and other countries in the coming months.

This feature will be available to creators through Anchor, allowing podcasters to mark episodes as subscriber-only and publish them to Spotify and other podcast-listening platforms.

For the next two years, this program will come at no cost to the creator, meaning that participating creators receive 100% of their subscriber revenues (excluding payment transaction fees). Starting in 2023, we plan to introduce a competitive 5% fee for access to this tool.

By enabling wide distribution of subscriber-only content, our aim is to help podcasters maximize their subscription audiences and grow them from their existing listener bases.

Spotify says subscriber-only content will be fully searchable and discoverable within the Spotify app, and that the shows will be marked with a lock icon on the play button.