Spotify has begun testing a new CarPlay interface as a beta within TestFlight, which incorporates a queue system. The beta version of the app is available now.

As a part of the new interface, users can now keep tabs on the upcoming tracks that will be played without having to look at their phones. Within the new CarPlay UI, Spotify users can access a ‘Go to Queue’ button from the ‘Now Playing’ screen. Users are also able to simply jump to an artist’s Spotify page by tapping on their name. Many of Spotify’s changes to the CarPlay UI is reminiscent of the Apple Music interface.

The new interface also includes quick navigational tabs across the top of the screen. With a simple tap on the UI, users can navigate to the ‘Home’ screen, ‘Library’, ‘Recently Played’, and the ‘Browse’ menu. 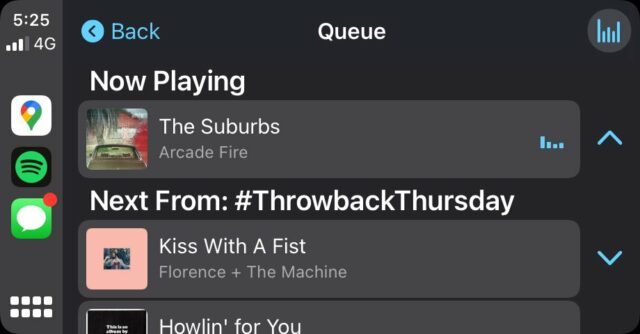 As reported by MacRumors, Twitter user Shaun Ruigrok discovered the TestFlight update and posted screenshots of the new interface.

So the latest Spotify iOS Beta got a great big CarPlay UI update!! This is so much better and brings it in line with Apple Music. Can even see the queue of upcoming songs and tap the artist name on the Now Playing screen to go to that artist. Yay! (@MacRumors @9to5mac) pic.twitter.com/MAI7SWHDlv

As the beta version of the UI is now available through TestFlight, a proper update to the CarPlay app should be released in due time. As of the time of writing, Spotify has not specifically narrowed down the time until the update is available on the App Store.