Staying on top of the latest singles by your favourite artists on Spotify has never been easier, as the company has just debuted an all new ‘Release Radar’ feature, that automatically creates personalized new releases playlist for you. Rolling out today, the feature gives you a weekly selection of the newest releases that matter most to you in one convenient playlist, saving you the trouble of manually searching for the latest gems. 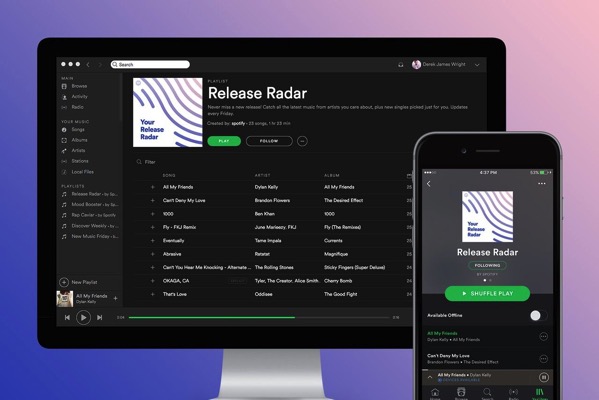 Release Radar will be updated every Friday, and give you up to two hours of the newest drops from the artists you follow and listen to the most. The playlist will also include some new discoveries based on your recent listening habits. As your music taste evolves, so will Release Radar. In fact, the more you listen, the better it gets. And because it’s a playlist, you can access and listen to it across all of your platforms and devices.

Release Radar is the perfect complement to New Music Friday, which connects you with hot new artists you may not know about yet. You’ll soon find your personalized Release Radar playlist in the New Releases for You section within Discover on mobile and desktop.

“With the huge amount of new music released every week, it can be difficult to keep up with the latest tracks,” says Matt Ogle, Senior Product Owner at Spotify. “With Release Radar, we wanted to create the simplest way for you to find all the newly released music that matters the most to you, in one playlist.”

You can download the latest version of Spotify for your device at this link.