Square Canada allows merchants to process payments for their business using the company’s tiny card reader accessory, allowing any iOS device to be turned into a point-of-sale machine.

The company this morning announced their first Square Canada Coffee Report, which took 12 months of sales data from their merchant partners across Canada, to reveal which Canadian cities pay the most (and least) for coffee.

The infographic below shows Calgarians pay the most on average for coffee, at $4.22 per transaction, while Montreal pays the least at $2.67. 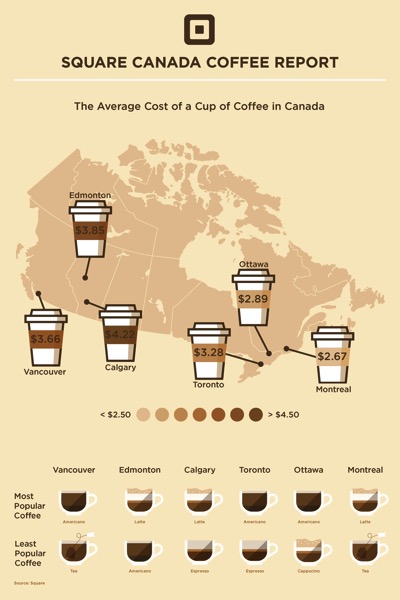 As for the most popular coffee beverages, Edmonton, Calgary and Montreal love their lattes, while Vancouver, Toronto and Ottawa favour Americanos. The least popular drinks in Vancouver and Montreal were tea, while Calgary and Toronto did not favour espressos.

Guillaume Kittel of Kittel Coffee, a Montreal-based coffee roaster, said “Square Analytics gives me the data I need to make smart business decisions. I’m able to see how my business is doing and this helps me save on costs and optimize for inventory and staffing needs.”

Square Dashboard for iPhone launched last summer, which brings real-time sales records and comparisons for merchants, all accessible within the app.