Square Enix Montreal has announced their latest game from their mobile GO series, Deus Ex, following in the footsteps of their previous hits Hitman and Tomb Raider. The new game for phones and tablets will debut this summer. 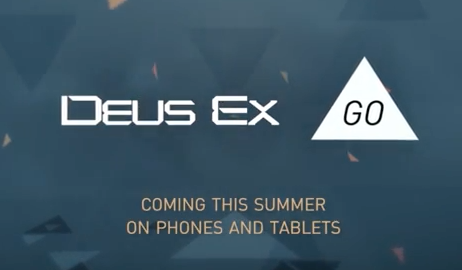 Below is the Deus Ex GO teaser trailer posted yesterday:

The game will be a turn-based puzzler again, but will integrate new power ups and enemy types, compared to its previous games. Below is the synopsis for the upcoming mobile title:

Deus Ex GO is a turn-based infiltration puzzle game set in a stylized interpretation of the Deus Ex Universe. As double agent Adam Jensen, you’ll use hacking, combat, and augmentations to solve the most challenging puzzles of the entire GO series. Work alongside your allies in TF29 and the Juggernaut Collective as you infiltrate locations to unravel the conspiracy behind a terrorist plot.

This is the announcement made today by Square Enix Montreal:

Square Enix Montreal game designer Etienne Giroux explained to Engadget they “create complexity in a simple way,” further adding “You’re not constantly learning new rules, it’s just that you realise these rules talk to each other. That they work together. And that’s really the complexity that we go for in these games, because they have to be simple, they have to be graspable, and we like that anyone can think that it’s easy for them to get into it.”

Deux Ex GO will have more levels than previous titles Hitman and Tomb Raider, while a level editor will be introduced for the first time after the launch, “that will be the best editor you see on the App Store.”