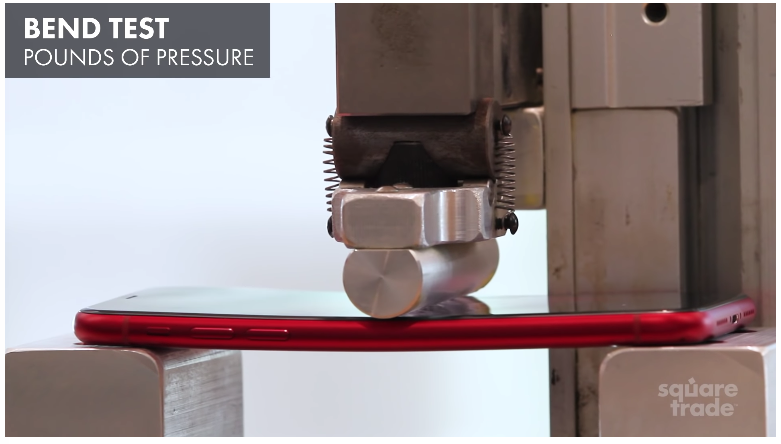 In the bend test, the iPhone XR passed “with flying colours”, says SquareTrade, succumbing to their bending machine at 260 pounds of pressure. The iPhone XR bent but did not crack and “worked fine, similar to the iPhone XS Max.” The iPhone XS bent at 250 pounds and its glass screen cracked.

“The LCD screen in the iPhone Xr has a similar level of durability as the OLED screen featured in the iPhone Xs and Xs Max. Our tests show that across the board — with both the LCD and OLED screens — the all-glass designs of all three new iPhones are susceptible to cracking from drops, which is the most common cause of damage,” said Jason Siciliano, vice president global creative director at SquareTrade, in a press release.

While the SquareTrade drop test saw the iPhone XR shatter on its first fall, previous unscientific tests on YouTube by EverythingApplePro saw the model survive much longer, able to withstand drops from 10 feet high.

The iPhone XR, even with its aluminum frame, appears much stronger compared to all aluminum models in years’ past, such as the iPhone 6 and iPhone 6 Plus, during so-called “bend gate”. Having glass on front and back definitely helps the structure, versus an all-aluminum design. #becausephysics?

When Consumer Reports tried to bend the iPhone 6 in 2014, it succumbed at 100 pounds, while the iPhone 6 Plus bent at 110 pounds. The publication concluded at the time the iPhone 6 was “not as bendy as believed.”