Researchers at Stanford University School of Medicine have developed an iPhone camera add-on called the ‘EyeGo’, that allows anyone with minimal training to capture, store and share high-quality images of the front and back of the eye. The portable iPhone accessory, which is expected to sell for around $90, can replace specialist ophthalmology equipment costing tens of thousands of dollars (via The Loop). 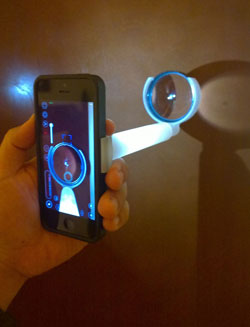 Developed by assistant professor Dr. Robert Chang and a resident named Dr. David Myung, the EyeGo was originally prototyped using components that are readily available online. But once the product is ready for mass production, the EyeGo “will be scanned so that it can simply be 3D-printed by anyone wanting one”. The EyeGo clips on to the back of the iPhone and uses two adapters to allow the smartphone’s camera to take close-up photos of the outside of the eye, as well the retina inside by shining light through the eyeball’s lens.

“Adapting smartphones for the eye has the potential to enhance the delivery of eye care — in particular, to provide it in places where it’s less accessible,” said Myung. “Whether it’s in the emergency department, where patients often have to wait a long time for a specialist, or during a primary-care physician visit, we hope that we can improve the quality of care for our patients, especially in the developing world where ophthalmologists are few and far between.”

Myung and Chang have recently been awarded seed grants from the School of Medicine and the Stanford Biodesign Program to fund the production of the initial batch of adapters.

Netflix Canada has released its list of new shows and movies coming in October 2022. For Netflix Games, there are now up to 28 free games on iOS and Android. Coming soon games include: Nailed It! Baking Bash; Spiritfarer; and Hello Kitty Happiness Parade. Check out the list of what’s coming to Netflix Canada in October 2022, […]
Gary Ng
6 hours ago

With the release of iOS 16, Apple has introduced the ability to change how your iPhone keyboard sounds or vibrates when you are typing, including the option to enable haptic feedback. However, in a newly published support document, Apple has revealed that turning on keyboard haptics might affect the battery life of your iPhone, as spotted...
Usman Qureshi
9 hours ago

According to analysts at JP Morgan, Apple is preparing to make India and Vietnam its key global manufacturing hubs as the company continues to cut its reliance on China, TechCrunch is reporting. In a note to clients sent out this week, the analyst claimed that the Cupertino company will move 5% of global iPhone 14...
Usman Qureshi
10 hours ago