The Stanley Cup Finally Joins Twitter and Gets a Special Emoji

Round one of the NHL Playoffs kick off today, as the battle begins to win the Stanley Cup. Aside from the fact only two Canadian teams are in the playoffs (Winnipeg Jets; Toronto Maple Leafs), the Stanley Cup has finally joined Twitter, with the handle @StanleyCup and a special emoji: 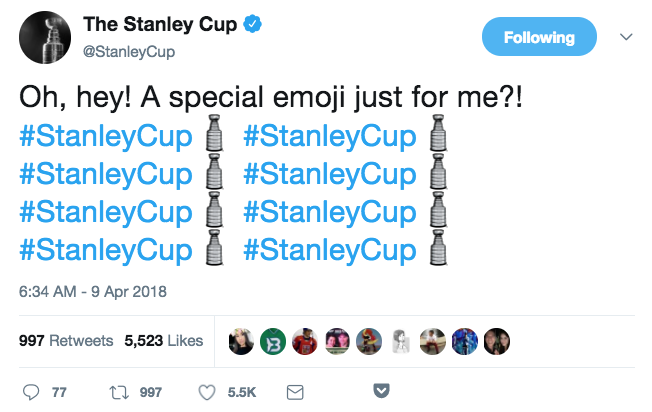 Recently, Twitter also shared some NHL data, specially the top 10 NHL teams with the most official mentions during the 2017-2018 regular season:

As for the most popular players with the most mentions this regular season? The top is none other than Canada’s own Sidney Crosby:

As for specific Canadian data, Twitter shared with iPhone in Canada our Canadian teams ranked by most mentions from the regular season, below:

Below are the official hashtags for all 16 teams in this year’s playoffs:

Who’s taking down Lord Stanley this year? Time to place your bets.

Today marks the official launch of Apple's iPhone 14 Plus. Rounding out the new family of Phones, preorders for the iPhone 14 Plus should be arriving to users around the world. However, for those that didn't pre-order, in-store pickup options are rolling out region by region. Currently speaking, if you navigate to Apple's website in...
Steve Vegvari
18 mins ago

Nintendo has revealed that Pilotwings 64 will be making its debut on Nintendo Switch Online + Expansion Pack later this month. On October 13th, players can take to the sky in this flight simulator title. After mysteriously not releasing a title in September, Nintendo seemingly returns to adding a new monthly game to its Nintendo...
Steve Vegvari
53 mins ago