Starbucks this morning launched the first express store in Canada, within Toronto’s Union Station. This marks just the third express location in the world, to go with two others opened up last year in New York City. 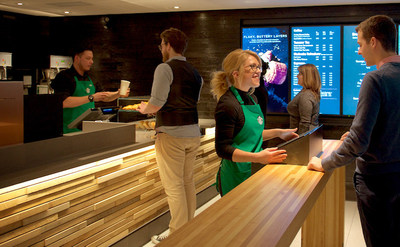 The 400 square foot express store is designed to streamline the ordering process for commuters, where an employee will take a customer’s order, which is then electronically sent to a barista. This “espresso shot” of a store experience, explains Starbucks, has no seating for a quick walk-through experience.

“Designed with the urban commuter in mind, the express store takes what is best about our cafés and refines it for faster service for our on-the-go customers,” says Rossann Williams, President, Starbucks Canada. “Express stores seamlessly integrate technology and efficiency into the customer experience, reducing the amount of time customers need to stand in line.”

Currently, the store does not support the company’s mobile order and pay feature which recently expanded to Vancouver, but a Starbucks representative reached by email told iPhone in Canada it will be coming, just not at this grand opening.

Once mobile order and pay is supported, customers will be able to order and pay from their iPhone, then bypass lines at this express store to pick up their drink. Now that’s how we should all get our coffee in the morning.

Update: Sources tell us mobile order and pay is set to expand across Canada on March 18. Stay tuned.