Canadians patiently waited to receive the ability to pay for our Starbucks with our iPhones, as that option finally arrived last November. In the U.S., our neighbours also had access to free App Store promo codes via Starbucks ‘App Pick of the Week’ cards. Finally, this too has arrived in Canada.

Just visit your local Starbucks and ask for the card, or find them at the counter. Just recently Starbucks offered up EA’s Scrabble as their pick of the week, as seen in the picture below. Not a bad deal, considering the game is priced at $1.99 in the App Store (although it was recently on sale for 99 cents as part of EA’s President’s Day Sale): 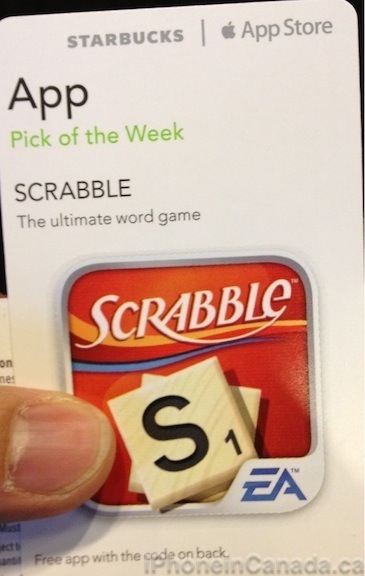 The promo codes are displayed on the back of the card. To redeem, just enter the code on your iPhone or in iTunes on your computer. Let us know if your local store has these cards in stock!

Thanks @justywusty for the tip!