According to a new reporter by eMarketer published today, Starbucks mobile payments service is still the market leader in terms of mobile payments users, beating out Apple Pay, Google Pay, and Samsung Pay (via TechCrunch) in the United States. The lead is said to continue this year with 23.4 million using Starbucks, compared with 22 million using Apple Pay. 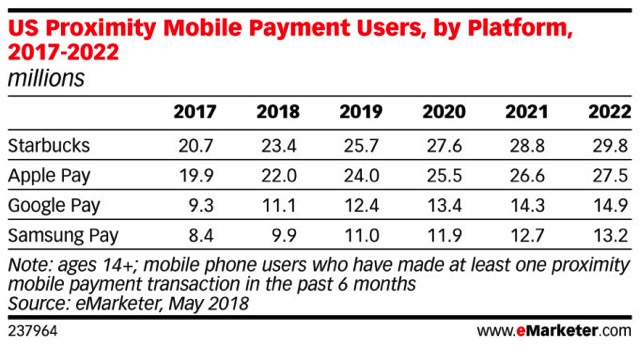 The report notes that the wide adoption of the Starbucks mobile payment service is tied to customer loyalty and the Starbucks app, which lets customers monitor and manage their card balance and their “star rewards”.

Furthermore, Starbucks offers a consistent payments experience across its stores without any exceptions, an advantage other mobile proximity payment services don’t have. A large number of retailers still don’t offer payment terminals that support Apple Pay and Google Pay.

Those numbers will increase across the board through 2022, but the rankings will remain the same – with Starbucks then seeing 29.8 million users to Apple Pay’s 27.5 million.

The report also highlights that for the first time this year, over 25% of U.S. smartphone users ages 14 and older, will have used a mobile payment service at least once every six months.