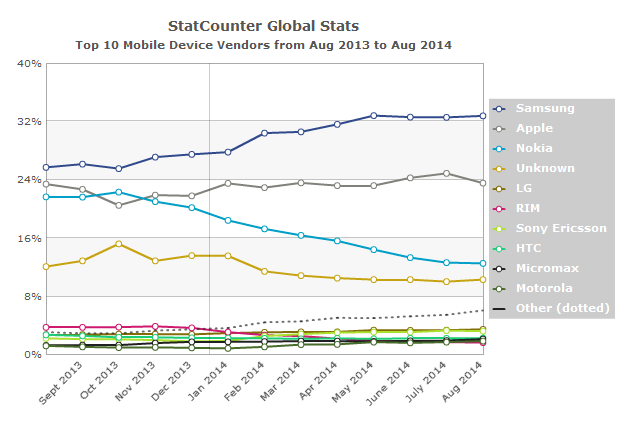 Latest report from an independent website analytics company StatCounter reveals that Apple has been ‘holding its own’ ahead of imminent iPhone 6 announcement, by maintaining its internet usage worldwide on 23.6% in August 2014 compared to 23.4% in the same month last year, despite reports of falling sales figures for iPhone. Meanwhile, Samsung has grown its share to 32.8% from 25.7%.

“Over the last year Apple has maintained its position in terms of internet usage despite the lack of a larger screen option, so this augurs well for the launch of iPhone 6,” commented Aodhan Cullen, CEO, StatCounter. “Some analysts have predicted that iPhone will cede global market share to lower cost competitors in emerging markets but Apple probably won’t lose too much sleep about this as long as they can win the higher margin end of the business.”

At the same time, the StatCounter research also finds that Apple remains the clear leader in the US in terms of internet usage with 51.4% ahead of Samsung’s 26.4%. The Cupertino giant also leads in the UK with 46% compared to Samsung’s 24.4%.

The StatCounter Global Stats data is based on over 15 billion page views per month to over three million websites.