Stephen Colbert has found yet another reason to love Siri. With the recent kerfuffle over Siri’s inability to locate abortion clinics in New York City, and directing similar request in Washington, D.C. to anti-abortion centers, Colbert is using the opportunity to have some fun with Siri.

(Note: Apple quickly responded to the New York Times, attributing the poor search results to “kinks in the product” and a reminder that Siri is officially still a beta product. An interesting commentary on the subject was posted to TidBITS. Danny Sullivan over at Search Engine Land has a detailed explanation of why Siri can’t answer all of our questions.) 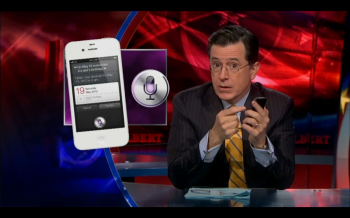 As Colbert sees it, Siri is “earning her conservative cred” with the (attributed) pro-life stances. He then goes on to make a few modifications to the program that builds off Siri’s well documented trouble recognizing foreign accents. His modifications, as he sees it, would make Siri the perfect “archconservative woman”.

Comedy Central doesn’t allow embedded video in Canada. Follow this link to see his creative software tweaks (you’ll have to jump to the shows second segment).