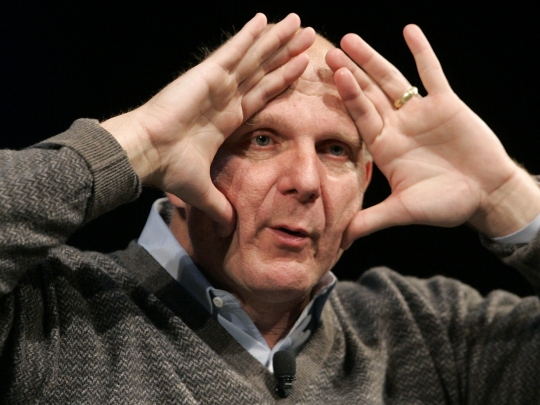 In an exclusive interview with CRN held in Toronto, Microsoft CEO Steve Ballmer had some tough words against fellow tech rival Apple. He noted Microsoft in the past had “ceded some of the boundary between hardware and software innovation” to Apple but with the upcoming release of the Surface, that will soon change.

“We are trying to make absolutely clear we are not going to leave any space uncovered to Apple,” said an exuberant Ballmer in a 30-minute interview after addressing some 16,000 partners at the company’s annual Worldwide Partner Conference in Toronto. “We are not. No space uncovered that is Apple’s.

“But we are not going to let any piece of this [go uncontested to Apple],” shouted Ballmer. “Not the consumer cloud. Not hardware software innovation. We are not leaving any of that to Apple by itself. Not going to happen. Not on our watch.

Who actually believes the words that come out of Ballmer’s mouth? This is the same guy that laughed when asked about the debut of the original iPhone in 2007, and in an interview declared it wouldn’t appeal to business customers because it didn’t have a keyboard.

Remember CES 2010 and Microsoft’s big announcement of ‘PC-slates’ running Windows 7? Those never materialized. With Surface, Microsoft did not announce a date of when it would be released, nor did it include any pricing or battery life specs. Surface sounds great on paper but when it was announced the press wasn’t even allowed to go hands-on with it.

Ballmer can talk all he wants, but maybe Microsoft should work harder towards releasing actual products. Check out this clip below that explains what I’m talking about:

Eero, an Amazon company, has just announced a new range of WiFi solutions, including eero PoE 6 and eero PoE Gateway Power-over-Ethernet (PoE) devices, for setting up faster, reliable WiFi networks at homes and businesses. The eero PoE 6 is a dual-band Wi-Fi 6 PoE access point that provides up to 2,000 square feet of coverage...
Usman Qureshi
30 mins ago

Amazon today announced at its special event an update to its best-sounding Echo speaker, the Echo Studio. This speaker is now available in Glacier White, joining Charcoal, while it also gets some enhanced audio technology updates, that will be available for all existing and new users. New custom spatial audio processing technology and frequency range […]
Gary Ng
39 mins ago