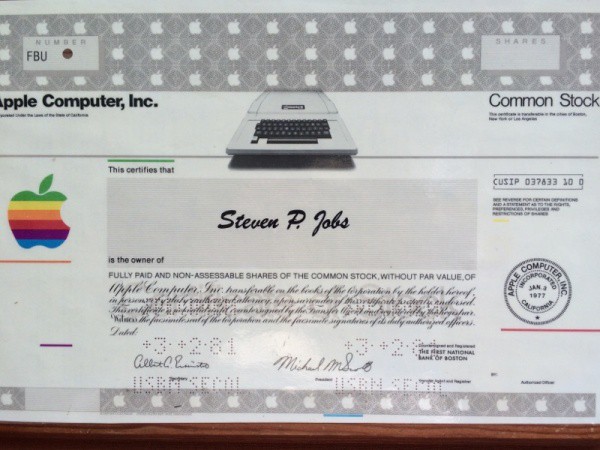 The first ever Apple stock (AAPL) certificate, that was given to Steve Jobs when Apple went public in 1980, is being offered for sale for a whopping $195,000. The certificate was reportedly hung on Jobs’ office wall at Apple until he left the company in 1985 (via Cult of Mac). Gary Zimet, chief executive of the company Moments in Time, which has put the certificate up for sale, says that documents signed by Steve Jobs are very rare.

Leaving without clearing out his office, CEO John Sculley ordered that Jobs’ possessions be disposed of if he wasn’t coming back to get them. Fortunately, the certificate was rescued by a smart (is there any other kind?) Apple employee, who held onto it for the next few decades.

One of the letters from Apple’s early days, addressed to former Apple co-founder Ron Wayne, was sold at Sotheby’s in 2011 for $1.5 million. It is therefore being argued that this iconic document of tech history could actually be underpriced.

Do you plan on mortgaging your house and grab this collector’s piece?

Terry Gou, the founder of Apple supplier Foxconn, was instrumental in convincing the Chinese government to ease COVID-19 restrictions in the country, which were significantly affecting iPhone production — reports The Wall Street Journal. The information comes from unnamed sources familiar with the proceedings. According to the report, Gou sent Chinese leaders a letter over...
Nehal Malik
37 mins ago