Steve Jobs’ hand-written CV, which is riddled with mistakes and offers a rare glimpse into the life of the late Apple co-founder, will be auctioned on March 8 at RR Auction in Boston, The Telegraph is reporting. The one-page document written by Jobs shortly after dropping out of university, is expected to fetch over £35,000 (approx CAD $35,000) at the auction. 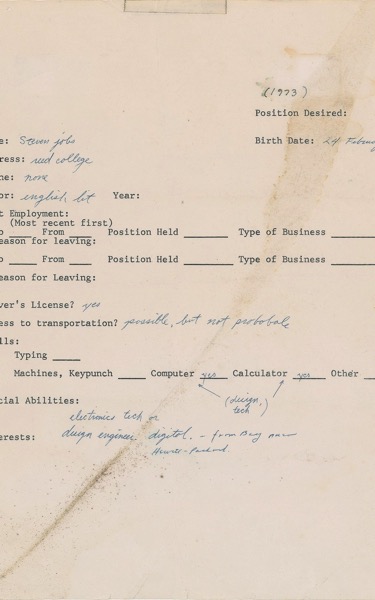 After attending high school in Cupertino, California, Jobs went to study at Reed College in Portland, Oregon, but dropped out after a term. He remained on campus for the next year or so, during which he would have written this job application.

The application includes Jobs’s full name, “Steven jobs”; address, “reed college”; phone, “none”; and major, “english lit.”, and reveals his desire for employment as “an electronics tech or design engineer” in 1973.

In the middle section, Jobs writes “yes” in response to “Driver’s License?” and “possible, but not probable,” in reply to “Access to transportation?” With regard to his skills, next to “Computer” and “Calculator”, he writes, “yes (design, tech).” At the bottom, he describes his “Special Abilities” as “electronics tech or design engineer. digital.—from Bay near Hewitt-Packard [sic]”.

In a speech at Stanford University in 2005, Jobs recalled: “If I had never dropped in on that single calligraphy course in college, the Mac would have never had multiple typefaces or proportionally spaced fonts.”

Jobs got his first technical job in 1974 as a technician at Atari, where he worked closely with Steve Wozniak. The two went on to create Apple in 1976.