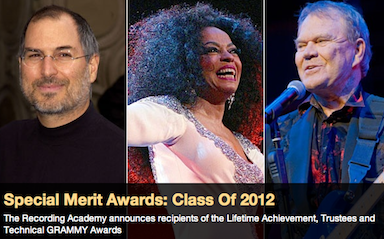 The Recording Academy has honoured Steve Jobs with a Grammy Trustees Award, which is described as:

This Special Merit Award is presented by vote of The Recording Academy’s National Trustees to individuals who, during their careers in music, have made significant contributions, other than performance*, to the field of recording. (*Through 1983, recipients included performers.)

In a press release, the Recording Academy notes the following description of the achievements of Steve Jobs:

As former CEO and co-founder of Apple, Steve Jobs helped create products and technology that transformed the way we consume music, TV, movies, and books. A creative visionary, Jobs’ innovations such as the iPod and its counterpart, the online iTunes store, revolutionized the industry and how music was distributed and purchased. In 2002 Apple Computer Inc. was a recipient of a Technical GRAMMY Award for contributions of outstanding technical significance to the recording field. The company continues to lead the way with new technology and in-demand products such as the iPhone and iPad.

Jobs is joined alongside some famed company as a recipient of this award, as Walt Disney (1989), Thomas Edison (1977), and The Beatles (1972) have also been awarded this merit award. This year, Dave Bartholomew and Rudy Van Gelder join Steve Jobs as winners for 2011.