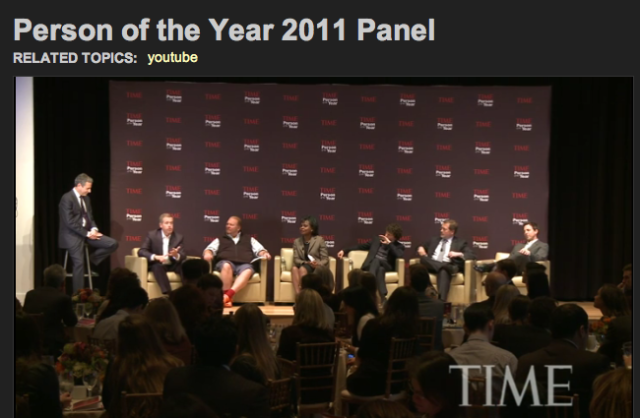 Steve Jobs could be the first deceased CEO to win the honour of Time Magazine’s Person of the Year, as noted by Fortune. Earlier this morning, three of the six people in a panel discussion supported the nomination of Steve Jobs, as first put forward by NBC’s Brian Williams. He was supported by Grover Norquist and Mario Batali.

Brian Williams, on the nomination of Steve Jobs:

“One guy, who changed our world, and I said to Seth Meyers as we walked across 6th Ave, ‘Just look with me on this one block walk at how he changed the world around us. Look at how he changed the world.’ Not only did he change the world, but he gave us that spirit again that something was possible that you could look at a piece of plastic or glass and move your finger – that’s outlandish. You could make things bigger or smaller like that. ‘Oh the places you’ll go’ and oh the way you will change forever the music and television industries. So may he rest in peace, Steve Jobs, and the spirit he represents, are my nominee for Person of the Year.”

As revealed in his biography:

Time decided they were going to make me Man of the Year, and I was twenty-seven, so I actually cared about stuff like that. I thought it was pretty cool. They sent out Mike Moritz to write a story. We’re the same age, and I had been very successful, and I could tell he was jealous and there was an edge to him. He wrote this terrible hatchet job. So the editors in New York get this story and say, “We can’t make this guy Man of the Year.” That really hurt. But it was a good lesson. It taught me to never get too excited about things like that, since the media is a circus anyway. They FedExed me the magazine, and I remember opening the package, thoroughly expecting to see my mug on the cover, and it was this computer sculpture thing. I thought, “Huh?” And then I read the article and it was so awful that I actually cried.

What a fitting way to extend Steve Jobs’ legacy for him to win this award. Even if he doesn’t win, Steve would still be my pick for Person of the Year. Some other nominees mentioned this morning include: Angry People, The Populists, Mohamed Bouazizi, Michael Pollen, The Bankers, Social Justice, Esraa Abdel Fatah, Elizabeth Warren.

Do you think Steve Jobs deserves a nomination, and should he win?