Steve Wozniak: Apple Starting in a Garage “Is a Bit of a Myth” [WATCH]

Apple co-founders Steve Wozniak and Steve Jobs were part of the revolution that made computers affordable to everyone. In an interview with Bloomberg BusinessWeek, Woz re-lives the story of building that Apple I computer, the first computer sold by the company, as part of the newspaper’s “85 Most Disruptive Ideas of Our History” list. 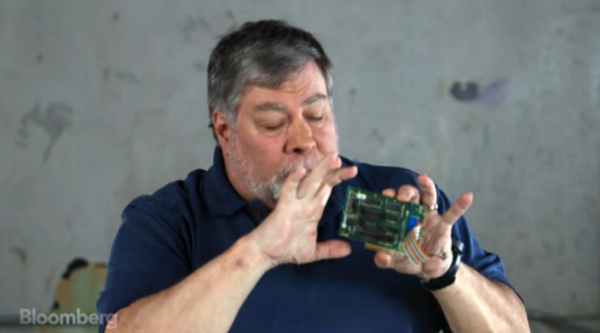 I was totally aware that a revolution was close to starting, that pretty soon we were going to have computers that were affordable. Every computer before the Apple I looked like—you have to imagine the most awful, not understandable computer you’ve ever seen in a museum or in a new movie. That’s what they all looked like. They had these big front panels of metal switches and lights and stuff, and nobody could understand them except a computer expert. The Apple I was the first one to have a keyboard and a video display. A television. You would type on the keyboard and see your words on the television, or the computer could type its own words on the television and play games with you and ask questions and give answers. That was a turning point in history.

We see Steve Jobs through the eyes of his former partner, Woz, who doesn’t like conflict. By contrast, Jobs “was going to make sure his position was strong and forceful and heard by others”, Woz says.

But he also mentions one highly important detail: “He [Jobs] had the best brain. He usually had little tiny suggestions, but almost always, he was right”.

During the interview, Woz relives those summer nights when he built the very first Apple computer. He also debunked one of the biggest Apple myth: “The garage is a bit of a myth. We did no designs there, no breadboarding, no prototyping, no planning of products.” What he emphasized was the need for perfection – something that has characterized Apple’s products ever since – because “you represent yourself when you do a great design”, Woz says.