Ash Bhat, a 16-year-old self-proclaimed developer and entrepreneur from San Jose, California, has won a scholarship to attend Apple’s Worldwide Developers Conference 2013, which runs from June 10 to June 14 in San Francisco. According to CNET’s report, the teenage developer developed an iOS app dubbed as myWWDC that earned him one of 150 scholarships. 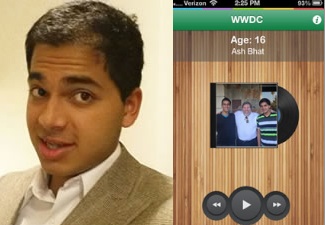 To enter the competition, programmers were given the assignment to use their creativity and coding skills and build an app that highlights their educational and professional background, technical skills, and interests, along with any development projects they’ve worked on. Bhat’s myWWDC app uses voice commands to navigate. Just tell your device what you want to do or where you want to go, and it complies. The source notes that Bhat’s app shares some features in common with Apple’s Siri but “goes at least a step further”.

“Here’s how it works: the app greets you with with a screen that prompts you to say hello. After it acknowledges your greeting, the app asks you to say the word “apple” to move to the next screen. Using just your voice, you can then navigate different screens that serve up information on Bhat’s background, education, skills, and projects.

Issuing commands like “next” and “back” moves you forward or back a screen. You can even access a help menu simply by saying “help.”

Siri requires you to press the Home button or lift the iPhone to your face to activate it. But Bhat’s app continually listens for your voice without any trigger required, avoiding the need for touch interaction”.

While it took Bhat around 16 to 17 hours over the course of five days to develop the app, setting aside enough time to create and submit it was a challenge. Here’s what he said:

“Apple purposely made a time constraint on submitting the application. That being said, all the student devs were rushed to put everything aside to focus on creating a kickass app that would impress Apple. In my case, it became a balancing act between school and development

Competition is always tough with some of the most intelligent students competing internationally for one of the 150 scholarship tickets.

The teenager started coding in his high school as a way to convince his parents to buy him a Macbook. Realizing that he possessed a certain flair as a programmer, he went on to built apps aimed at fellow high-school students.