Summary of iPhone Users in Canada

A couple weeks ago I posted a poll asking YOU, readers of this blog where you are using your iPhone in Canada (it’s not too late to vote!).

In that time, just over 1100 people participated in the poll from coast to coast. Here is a quick summary of where the majority of iPhone users are located within the Great White North (as of March 15th): 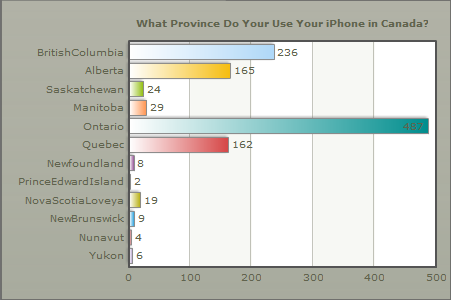 Looks like the top province is Ontario, followed by BC, Alberta and Quebec are pretty much the same, then a small majority from the rest of the country. Who are the folks from Nunavut? 🙂

What about the cities? Well, I had people respond in the comments about which city they’re from. I got responses from people in Calgary, Toronto, St. John, London, Kingston, Victoria, Ottawa, Windsor, Montreal, Cambridge, Richmond, Winnipeg, Vancouver, Halifax, Cold Lake, Thunder Bay, and Kamloops. Thanks to everyone who voted in my poll. Enjoy your Sunday! =)