What if Super Mario Run was a Free to Play Game?

For those who might have been wondering what Super Mario Run would look like if was a free to play game just like Pokemon GO, the folks over at PocketGamer have given us a look at a parallel universe where Super Mario Run is indeed free to play. Apparently though, the hypothetical free to play version of Nintendo’s latest iOS game is a lot harder, with cheap deaths and painful enemies. 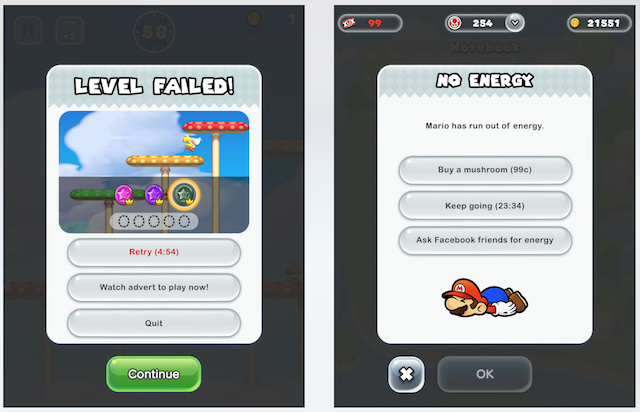 In a universe where the game is free, Mario only has a certain amount of energy, and the poor lad gets tuckered out whenever you play a level. If you run out of energy you’ll have to pay up, wait around, or bother your social media pals to keep playing. It’s much harder too. And if you ask why? Well, so you’ll die, and the developers can try and get a bit more cash out of you, of course. When you fail in this game you’ll need to watch an advert or wait five minutes before you can try again.

And that’s not all, it gets worse:

Bubbles are handy tools in Super Mario Run. Whenever you start a level you get two, and can use them to save your skin or return to an area with a coloured coin. In the free to play version you’ll have a persistent bubble collection and will need to top it up with in-app purchases.

Well, this one is obvious. They don’t make craftsmen like they used to: free to play builders always need about 16 hours to make even the simplest stuff. Come back tomorrow, maybe?

You worked hard, you got a reward, and then the game holds back half of it until you watch an advert. Though, the devs make it sound like they’re being generous.

Oh well, I guess a one time purchase of CDN $13.99 to rid ourselves of all this nonsense sounds kinda fair, don’t you think?