Android phones, a number of Blackberries and smartphones running older Microsoft operating systems are all vulnerable to FinSpy, a spyware from one of the world’s most prominent surveillance companies Gamma Group, but one thing the company is still unable to do is to hack into a typical iPhone.

According to an article by The Washington Post, this is exactly why most surveillance companies hate Apple’s smartphone.

The source reveals that FinSpy spyware can turn a vulnerable smartphone into a potent surveillance device. Users of the spyware are capable of listening to calls on targeted devices, stealing contacts, activating the microphone, tracking your location and more. But for FinSpy to hack into an iPhone, the device must be jailbroken. “No jailbreak, no FinSpy on your iPhone”, shows a leaked Gamma document dated April 2014.

“This is good news for people with iPhones, and perhaps for Apple as well. But at a time of rising concern about government surveillance powers, it’s ironic that a different mobile operating system – Google’s Android – has emerged as the global standard, with a dominant share of the world market. Android phones have more features. They come in more shapes, sizes and colors. And they’re cheaper. But, it’s increasingly clear, they are more vulnerable to the Gammas of the world, and from the police and intelligence services that use their tools.” 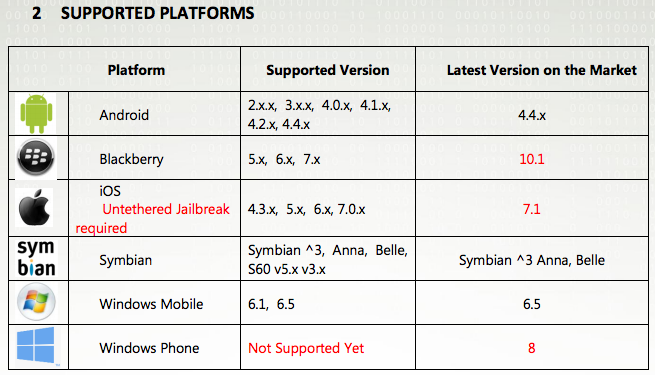 The report concludes that users willing to pay a premium for an iPhone or an iPad, perhaps for their design elegance or ease of use, are also getting disk encryption by default, and an OS that even powerful surveillance companies have trouble hacking.