According to a new survey from Morgan Stanley Research, demand for Apple’s upcoming iPhone 5S and iPhone 5C smartphones is quite strong, suggesting that concerns over device preorders may be ‘overblown’, AppleInsider is reporting. Analyst Katy Huberty has added that Apple may ship 34.5 million iPhone units in the current quarter, which will end in less than two weeks after the iPhone 5S/5C handsets hit the stores. 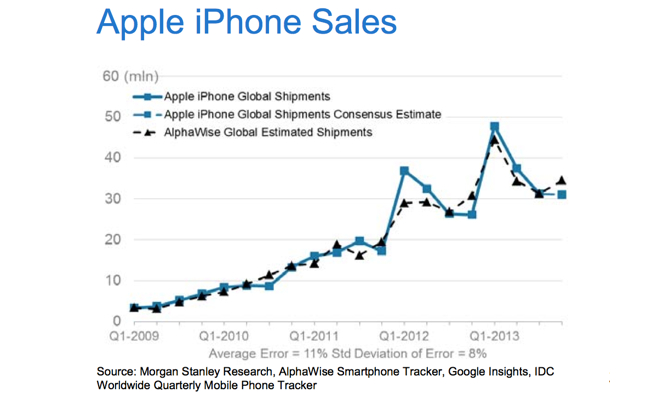 Morgan Stanley has published the latest AlphaWise data obtained by tracking web search trends in key markets where the iPhones are set to launch, including the U.S., U.K., Germany, France, China and Japan. If Apple goes on to ship 34.5 million iPhone units by the end of September quarter, it would mean a 15% quarter over quarter increase in iPhone shipments, compared with a similar quarter over quarter increase (16%) Apple saw in the same period last year.

While this is the first time Apple is releasing two distinct new iPhone models simultaneously, with preorders only available for the second-tier iPhone 5C, it is also the first time it hasn’t touted record preorders for its latest iPhone, resulting in tumbling of its stock price earlier this week. However, Huberty notes that investor concern over the lack of an announcement may be “overblown.”

“We don’t view preorders in 2013 as comparable to past years given the higher-end iPhone 5s, which is the more likely choice for early adopters, isn’t available for pre-order,” Huberty wrote in a note to investors.

She noted that Wall Street consensus calls for Apple to have shipped around 31 million iPhones in the September quarter, a figure less than the latest survey data suggests the company will actually ship.

As of today, Apple’s colourful iPhone 5C is still available in stock for preorder through Apple’s online store in Canada, though shipping in 3-5 days now, while the iPhone 5S will be available for store pickup and online order on coming Friday.