A Swiss telecom makes its own version of the Apple TV remote. 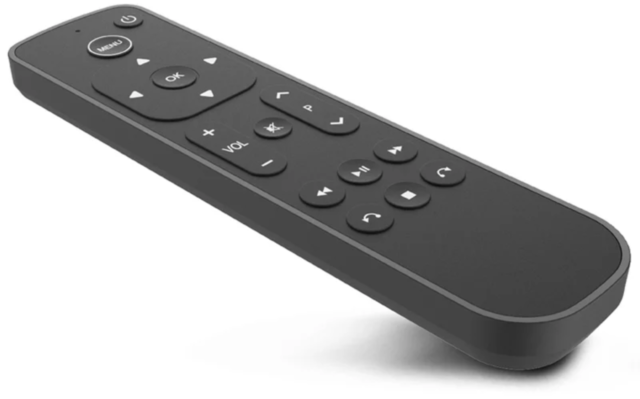 The Apple TV remote has been widely panned by users since its introduction, with critics complaining that its modern design makes it awkward to use properly.

The remote is minimalist to the point of being difficult to use — and one Swiss TV and internet provider has apparently taken note. While Swiss telecommunications company Salt provides Apple TVs to its customers, it does so with its own traditional remote, reads a new report from MacRumors.

The new remote looks more like a “proper” remote than anything Apple has made and while it was reportedly designed in collaboration with Apple, it’s clear this is something it wouldn’t want to ship itself.

The remote natively supports Apple TV, just like Apple’s own remote, but it offers a standard control pad for navigation. It’s so basic, in fact, that it doesn’t offer a microphone for Siri — likely due to the fact that there’s no Siri service in Switzerland. There’s also no numerical channel button since tvOS does not support it.

Unfortunately, you can buy these remotes only in person at a Salt Store in Switzerland. We hope Salt opens up international sales, or that Apple finally admits that the Siri Remote (as it’s known in the US and other countries that support Siri—it’s called the Apple TV Remote elsewhere) has some significant design flaws.