It appears that the days of handling camera gear, light stands, and tripods are at an end. Apple has looked into the future and seems to have found the next big break in journalism.

Swiss news program Léman Bleu recently gave their entire reporting team kits containing a microphone, an iPhone 6, and a selfie stick so they could do their day to day news reporting. The move will certainly anger long time field photographers and other station employees. 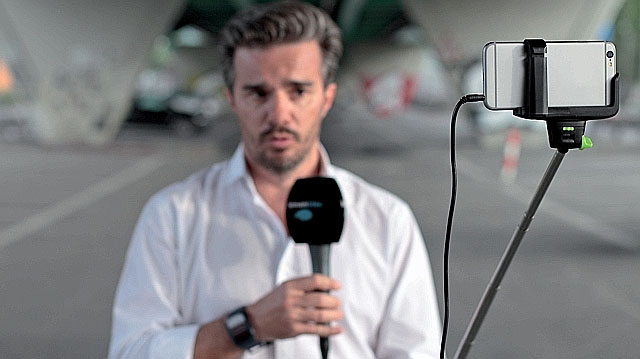 The traditional news industry has been struggling with how to stay relevant in the face of new media for years. Social media and blogs are able to report on events and breaking news within seconds of it happening, which has introduced a struggle for more traditional media outlets.

When the audience switches away from traditional media, it causes those media outlets to lose money. This causes news stations to do (somewhat questionable) things like trade in their professional gear for an iPhone.

Léman Bleu’s news director confirmed that the move was in part to reduce costs, but also hoped it would bring about a lightness and responsiveness for the views. Apple is clearly excited about the news, with the company’s SVP of Worldwide Marketing Phil Schiller tweeting about it:

The revolution will be televised – on #iPhone http://t.co/D9356WIblh

With iPhones growing in capability and speed, even now with the ability to shoot in 4K, these devices may be easier to use in several situations, like war zones or hard-to-access areas.