SwitchEasy has just announced a new, innovative 3D protective shell for the iPhone 6 and iPhone 6 Plus called ‘AirMask’, that functions as both a screen protector and a case as it wraps around the phone, creating a shield with its two layers. With a super thin 0.35mm form factor, the AirMask’s outer shell is made from specially formulated polymer mixed with polycarbonate to increase hardness and durability.

The AirMask’s unique 3-D adhesive shell design allows users to immediately apply AirMask without the hassles of fighting phantom bubbles during screen misalignment. However, it won’t leave a sticky residue if the protective shell ever needs to be removed. It also features a special anti-slip texture on the outside that helps users to grip their phone.

Similar in construction to the 0.35 case for the iPhone 6, we wanted to create a product that formed a protective shell around the iPhone including the screen that was easy to apply, but wouldn’t cause bubbles as is a common problem when applying protective films to a screen,” said Julian Yang, Sales and Marketing Director of SwitchEasy. “We’ve gotten great response from our customers about our micro-thin cases and accessories, so this was a logical step to create a unique form factor that still offers next generation protection.” 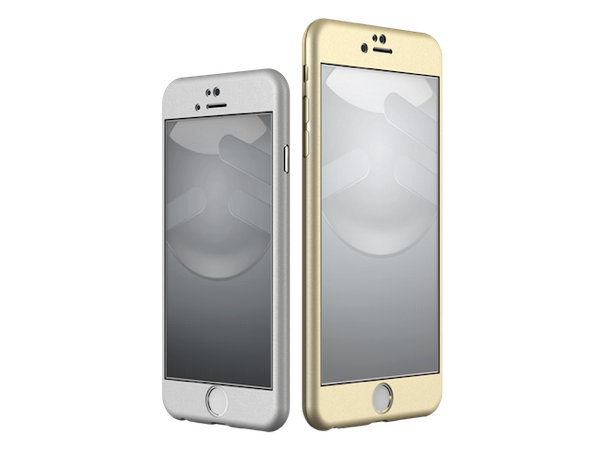 The SwitchEasy AirMask for the iPhone 6 and iPhone 6 Plus will be available in three colors i.e champagne gold, aluminum/silver and cosmic gray in late November for $24.99 and $29.99 respectively.