According to the latest data released by security firm Symantec as part of its annual internet security threat report, Google’s Android was the target of all but one of the new mobile malware families discovered in 2013, AppleInsider reports. Microsoft’s Windows Phone was the subject of the only non-Android malware discovery. 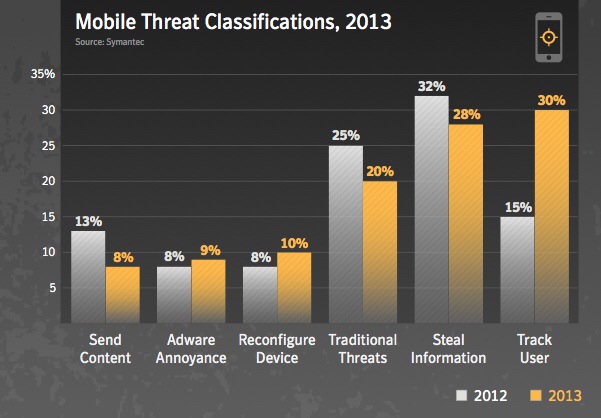 The report highlights that Android’s major weakness, which makes it vulnerable to all sorts of new and old mobile malware, is the various app stores, both official and third-party, available to users. Last year, a Remote Administration Tool (RAT) was found in a number of apps hosted in Google’s Play Store. Other threats posed as legitimate apps, for instance Android.Fakedefender, which purported to be a malware scanning app, was itself a trojan, extorting users to pay for the removal of nonexistent viruses found after a fake scan of their Android devices.

“To highlight Android app stores’ vulnerability, Symantec specifically called out “the release of an instant messaging application by a well-known smartphone vendor on the Android platform,” likely referring to BlackBerry’s BBM. “Attackers in turn took advantage of the popularity of the new app and released a variety of counterfeit versions bundled with adware. These apps were quickly removed from the Android marketplace, but not before accumulating a large number of downloads,” they added.”

The source also notes that malware authors have begun to branch out from simply attempting to steal users’ personal information to attacks traditionally seen on desktop operating systems.

With Apple approving apps before they appear in the App Store, the chances of malware and security threats are much lower than compared to Android devices. Just take a look at this recent #1 Google Play paid app called Virus Shield that was recently pulled–it was a complete scam. Mind boggling.