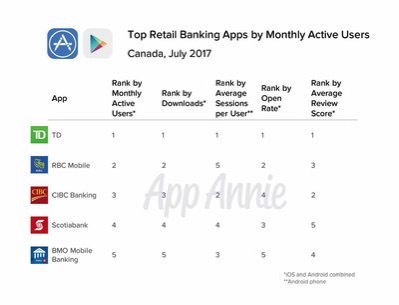 “Mobile continues to be our top channel for customer transactions, so we are very pleased that our commitment to delivering best-in-class mobile banking services is recognized,” says Rizwan Khalfan, Executive Vice President and Chief Digital and Payments Officer at TD.

“We’re thrilled to be ranked so highly on metrics that directly reflect what’s driving value for our customers. It’s great validation – and feedback – as we continue to focus on building experiences that enable our customers to bank when, where and how they want.”

“Undoubtedly, mobile apps are a disruptive force in banking, but they also present a significant opportunity for established banks with a large retail or branch presence,” said Bertrand Schmitt, CEO and Co-Founder, App Annie. “Thanks to mobile, users are more engaged with their banks and feel more empowered when it comes to their finances than ever before.