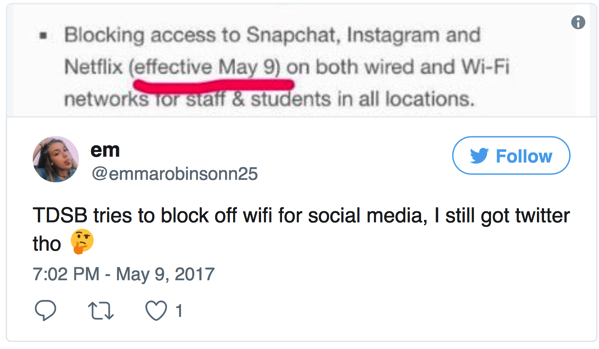 According to a CBC News report, the Toronto District School Board (TDCB) is continuing to block Wi-Fi access to Instagram, Netflix and Snapchat, saying that it will continue to work to upgrade the networks at its schools and will revisit the policy in June 2018.

The board added that there have been “unexpected delays” in its effort to move schools over to a faster system over the summer months.

“It’s not a judgement call on these specific apps but when you look at the bandwidth that these three apps take up, we felt it was easier to block those three without having a signficant impact on the teaching and learning within the classroom,” board spokesperson Ryan Bird told CBC Toronto.

Earlier this year, the board blocked Wi-Fi access to the three sites, a move that was less than popular among students, who took to social media to voice their discontent. TDCB also put up a notice on its website, saying that staff had reported experiencing faster internet speeds as a result of the reduced traffic and were able to complete “necessary operational tasks such as attendance” as a result.

Mr. Bird told the publication that once the networks have been upgraded sufficiently, “then we can essentially turn the taps back on”.