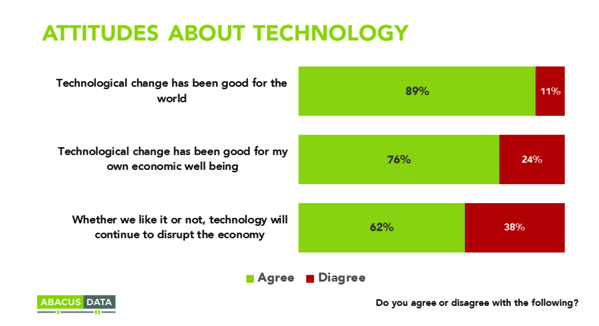 Canadians don’t see technology as a threat to their jobs, according to a recent survey published by the Ottawa-based firm Abacus Data. The firm found that 89% of Canadians agreed with the statement, “technological change has been good for the world”, and 76% agreed that “technological change has been good for my own economic well-being” (via the Globe and Mail).

“The broad consensus that technological change has been good for the world crosses party lines, generations, and self-defined class status,” Abacus said in a release. “Majorities in every case are of the view that the impact has been positive for them personally.” Only 18 per cent of adults were fearful about the impact of technological advances, artificial intelligence (AI) and the Internet, as well as globalization and immigration.

In the light of AI advancements in Canada, which have paved the way for technology to radically change how work is done and by whom and by what, the prospect that millions of workers could be displaced by machines in years to come arose. 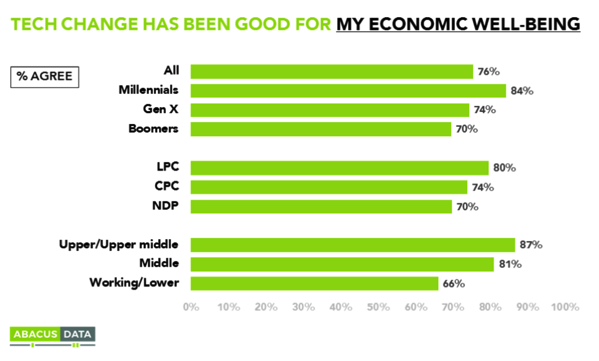 Canadians were evenly split on whether AI and automation helped or hurt the country’s future economic prospects, and were relatively more negative on the potentially harmful impacts of technology on the Canadian economy than from immigration or globalization.

Those who are pro-technology say there will be plenty of work for humans, but how they do their jobs and what they are paid could be transformed.

The results are based on responses from 1,500 randomly selected Canadian adults online between April 21 and 24.