Shaw recently increased Internet prices for its customers across the board, and now it appears to be targeting independent Internet Service Providers (ISP) that resell network traffic, such as Teksavvy.

Marc Gaudrault, Teksavvy’s CEO, posted on DSL Reports two days ago the following, sharing the massive price hike Shaw is proposing for independents–an increase of nearly 88%. The proposed prices have yet to be approved by the CRTC:

According to OpenMedia’s campaigns manager Josh Tabish, he had the following to say:

…Canadians are already paying some of the highest prices in the industrialized world for service, and speeds have fallen far behind our global counterparts. And this at a time when Shaw’s customers just faced a 10% price hike – after the company reported record profits in the last quarter.”

Tabish went on to say the fear is Rogers, TELUS and Bell would follow suit in line with Shaw and raise Internet prices for customers, as illustrated in the organization’s image below titled “The Big Telecom Price-Gouging Cycle”: 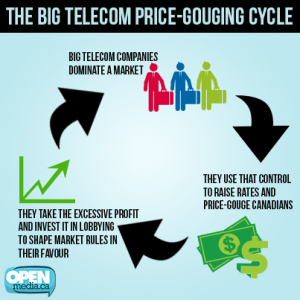 Back in 2011, Teksavvy was in the thick of things involving the CRTC’s decision on Internet user-based billing, which was eventually overturned by the Federal government.