Secure messaging app Telegram, which was launched back in August 2013, has officially hit the 200,000,000 monthly active users mark, less than 2 years after hitting the 100 million users milestone. “We have never promoted Telegram with ads, so all these 200 million people are on Telegram because you invited them to join”, announced Telegram in an official blog entry. 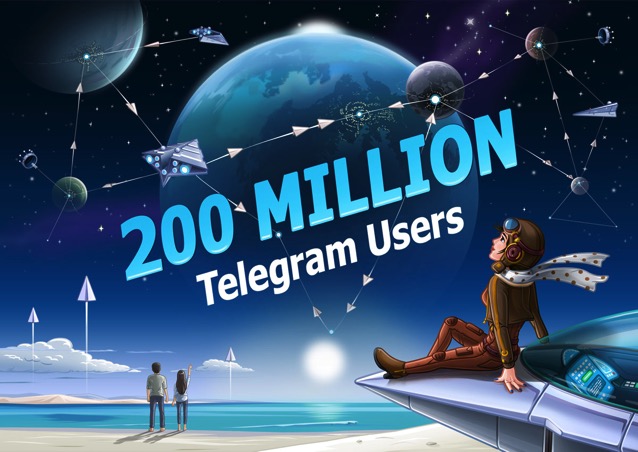 Telegram, which was the first messaging app to roll out end-to-end encryption to users, doesn’t have shareholders or advertisers to report to like other popular apps. The app doesn’t deal with marketers, data miners or government agencies. “Since the day we launched in August 2013 we haven’t disclosed a single byte of our users’ private data to third parties”.

Above all, we at Telegram believe in people. We believe that humans are inherently intelligent and benevolent beings that deserve to be trusted; trusted with freedom to share their thoughts, freedom to communicate privately, freedom to create tools. This philosophy defines everything we do.

Over the years, our unconditional trust in people allowed us to do things other apps were hesitant to implement; things such as support for insanely large group chats, unlimited broadcast channels and a free user-generated sticker platform.

Telegram also became the first popular messenger to provide 100% open APIs for third party app and bot developers. “While we unconditionally believe in people, it turns out 200,000,000 humans also believe in us. Thank you for this – we will always have your back.”

Logitech is launching a brand new line of 'Designed for Mac' keyboards and mice. The announced products are specifically aimed at servicing Logitech's Apple users. The lineup of 'Designed for Mac' devices includes the MX Mechanical Mini for Mac Keyboard. This keyboard offers the traditional Mac layout. It features backlit keys and is USB-C rechargeable....
Steve Vegvari
34 mins ago