Tesla has announced it has hired away Doug Field, Vice President of Mac Hardware Engineering at Apple. The company’s press release makes sure everybody knows Field departed Apple for Tesla:

Tesla Motors has hired Doug Field to be its Vice President of Vehicle Programs, responsible for driving development of new vehicles. Doug is an accomplished leader and engineer of innovative, high-technology products, most recently serving as Vice President of Mac Hardware Engineering at Apple. Doug led the development of many new products at Apple including the latest MacBook Air, MacBook Pro, and iMac. Doug began his career as an engineer at Ford Motor Company.

Elon Musk, Tesla co-founder and CEO, said Field “has demonstrated the leadership and technical talent to develop and deliver outstanding products, including what are widely considered the best computers in the world.”

Field responded in a statement to say “Until Tesla came along, I had never seriously considered leaving Apple,” going on to further say “Tesla is at last an opportunity for me and many others to pursue the dream of building the best cars in the world—while being part of one of the most innovative companies in Silicon Valley.”

Field’s LinkedIn page still lists his current employer as Apple, with the job title of VP of Product Design. He has worked at Apple since July 2008. 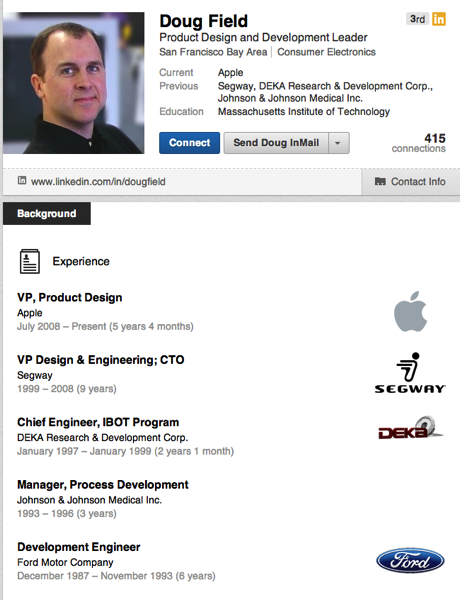 The news was first noted by a tweet from CNBC: