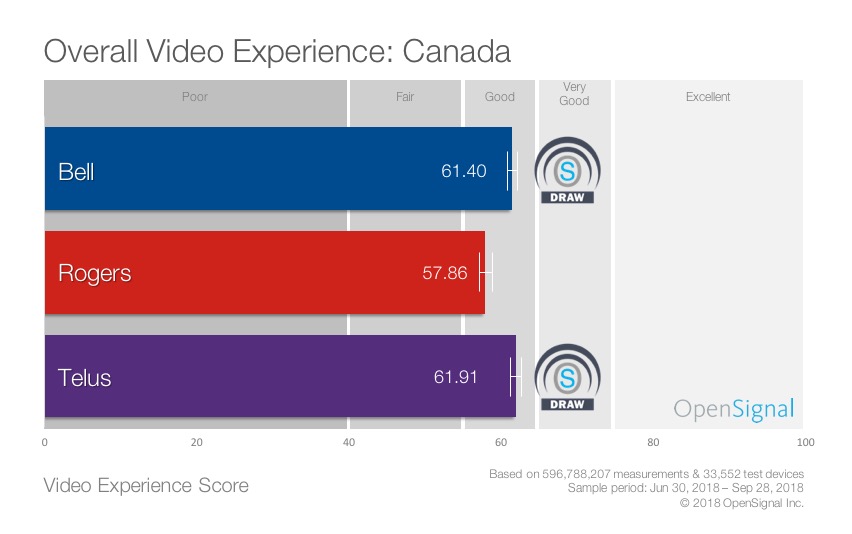 According to OpenSignal’s recent State of Mobile Video Report, Canada is one of two countries in the Americas to command a ‘Good’ score in video experience rankings, while also beating out the U.S. in mobile video quality. Within Canada, the report found that both Telus and Bell share the lead and offer a slightly better level of video experience than Rogers.

“In our Canada analysis, Bell and Telus were statistically tied for the lead in our video experience analysis, both with scores between 61 and 62. Rogers, however, wasn’t too far behind with a score just below 58. All three scores fell within the Good range, meaning that Canada’s operators are all offering a comparably reliable video experience, though Telus and Bell definitely have an edge.”

The firm explains that in its 0-100 scale, a Good score falls within the 55-65 range and shows that video streamed from the internet to a phone or tablet renders at low and high resolutions “but exhibits longer loading times before playback begins”, especially at HD resolutions.

OpenSignal’s Good rating is just below Very Good, which is the highest rating achieved by any of the 69 countries it analyzed in its report.

It must be noted that the countries with the fastest download speeds aren’t necessarily the ones offering the best video experience. Instead, network latency plays a significant role in improving video streaming experience. The report found that in Canada, Bell and Telus had average 4G latencies at least 6ms lower than Rogers.

Being a Bell, Rogers, or Telus subscriber in Canada, let us know about your own experience with video streaming in the comments section below

The folks over at YouTube channel TechRax decided to blend Apple’s latest flagship iPhone 14 Pro in a durability experiment and see what happens. Earlier this week, the same folks tried to give the iPhone 14 Pro a facelift by sawing off the rear camera bump. The camera island on the back of this year’s iPhone 14...
Usman Qureshi
27 mins ago

Amazon has just offered a sneak peek at all of the games Prime Gaming subscribers will be able to access for free starting Saturday, October 1st. Prime Gaming is Amazon Prime's home for gamers. Benefits include in-game loot, free games every month, a free monthly channel subscription on Twitch, as well as all the benefits...
Usman Qureshi
37 mins ago