Just hearing that title sounds quite strange doesn’t it? Given that Rogers has dominated the iPhone landscape in Canada since introducing the iPhone 3G in 2008, and the iPhone 3GS in 2009, it’s going to get crowded now that Telus and Bell are joining the fray.

Rumors Become a Reality: Telus and Bell Will Sell the iPhone in Canada in November

Long ago, rumors mentioned the possibility of the iPhone coming to Telus and Bell given their shared HSPA network building. These rumors were confirmed when the Globe and Mail broke the news early, and Telus and Bell confirmed the iPhone a day later.

When anything “iPhone” related is discussed, it’s always a hot topic–especially when it comes to existing Rogers customers. Now that there will be two “new” GSM competitors thrown into the mix, what exactly will happen to prices and plans? Will they get better, worse, or stay the same?

A couple years ago, Telus introduced a $15 unlimited data plan–which many people jumped on like hotcakes. A few of my friends on Telus still have this plan and are holding onto it like it’s their “golden ticket” from Charlie and the Chocolate Factory. A big question is whether or not this data plan will be grandfathered onto the new HSPA network. Times have changed and the iPhone uses lots of data–not compressed Blackberry data.

Current Telus smartphone data plans are as follows (this is on TOP of your voice plan):
$35: 500MB, Unlimited SMS, Caller ID, 10 Voicemails
$45: Same as above but 1GB and Visual Voicemail

It will be interesting to see how these smartphone data plans will be changed for the iPhone.

Bell iPhone Users Excited to Use the Largest National Network

Looks like Rogers’ claim of having the largest and fastest network will be coming to an end. The speed of the Bell and Telus HSPA network versus Rogers is keeping Bell customers excited. What are examples of current smartphone plans on Bell?

What we can conclude here is that it’s not pretty. We can only hope that with all three major carriers selling the iPhone, promotional pricing and extra bonus incentives are the only way they will lure customers away from their existing networks. 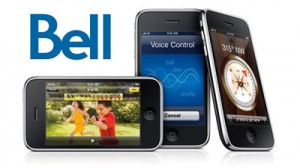 The networks will dangle “bonus” unlimited local minutes, early evening and weekends (probably at 6pm or 7pm), unlimited texting, etc. but only for a limited time–to get you sign your life away to a three year contract for the iPhone. They might even throw in some free accessories to sweeten the deal. The funny thing is people will jump right onto the iPhone train because it’s just beginning to take off.

I can only imagine the workload cut out for customer service reps once these iPhone wars start up next month. Once the holidays come, I would expect some amazing deals either from Bell, Telus, or Rogers to sign up as many iPhone customers as they can. As for actually finding an iPhone 3GS in stock? Err…that’s another story…

What do you want to become? A Telus, Bell, or Rogers iPhone customer?