Looks like some more Telus iPhone rumors are coming our way! Reported previously is that Telus will have their HSPA network up and running this October. When that happens, also expect Telus to drop the gauntlet on Rogers by selling the iPhone as well.

So I want to first thank the person that dropped this into my lap. But Telus will be acquiring the rights to the iPhone in October. Directly from the mouth of a executive at Telus. Save the “I thought Rogers had an exclusive agreement” talk. I won’t get into all that. Just know that it is coming.

Of course, with any rumor we need to take them with a grain of salt. It seems that the so called “exclusive” deal Rogers has with Apple is merely based on network. Rogers is the only GSM carrier in Canada, while Telus and Bell are still using CDMA.

Vancouver Sun reporter, Gillian Shaw had the chance to speak with Telus spokesperson Shawn Hall about rumors of the iPhone coming to Telus. This is what he had to say:

“We’re always interested in bringing the latest and greatest devices to our customers. We will have the ability to offer both CDMA and GSM handsets which is the best of both worlds.”

Uhh…okay? Mr. Hall didn’t confirm or deny anything, so that leaves us with the impression that something could be coming our way. He also mentioned a full launch in early 2010 of their HSPA network. However, I’m pretty sure Telus would do a soft launch in the Fall to test the network and ensure things are smooth sailing once the Olympics hit Vancouver.

Evidence That the Telus/Bell GSM Network is Already in Place

Could we be seeing the following added to our list of carriers on our iPhones? Only time will tell! 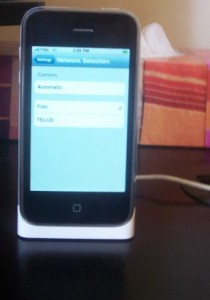 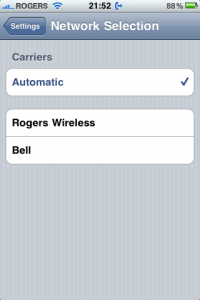