We’ve seen numerous drone flyovers of Apple Campus 2 detailing its construction update, but what about the Tesla Gigafactory in Sparks, Nevada?

Duncan Sinfield, one of the drone pilots we all know from covering Apple Campus 2 updates, has posted a video detailing the humungous Tesla Gigafactory.

This factory, when complete, according to Tesla founder Elon Musk, will have the largest footprint of any building in the world, with as much as 15 million square feet, after counting multiple levels. The Gigafactory is so large, it’s hard to put the scale in the video to perspective. 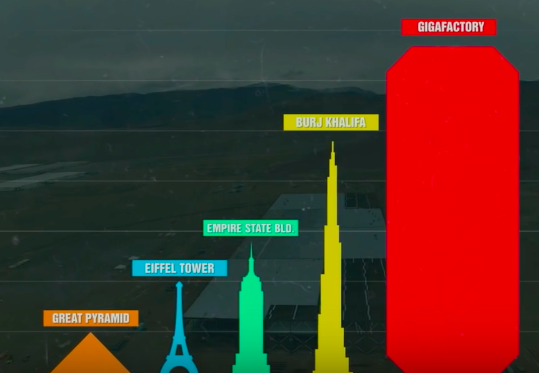 Image from Below the Flood

Musk detailed the Gigafactory to Leonardo DiCaprio in the latter’s recent documentary on climate change, Before the Flood.

According to Musk, 100 Gigafactories would be enough to transition the entire world to sustainable energy. But Tesla alone would not be able to do it, so Musk says other companies larger than his would have to do the same thing, along with governments setting rules to favour sustainable energy, such as putting a price on carbon (i.e. a carbon tax).

You can watch Sinfield’s flyover of the Tesla Gigafactory below:

Check out DiCaprio talking to Musk in Below the Flood below, at the 57 minute mark (the movie’s free viewing ends tonight, but you can also rent it on iTunes to view later):

Tesla’s Gigafactory opened this summer, with only 14 per cent of the building complete. Construction is set to be finished in 2020, for the $5 billion project. The company says battery production will begin next year, and by 2018 Tesla should be able to make 500,000 Model 3 cars per year. TechCrunch has more on what the Gigafactory will mean for electric vehicles.

Currently, Model 3 reservations can be reserved in Canada with a $1,000 deposit; total reservations have already hit 375,000. Final pricing in Canadian dollars has yet to be announced (U.S. pricing starts at $35,000), but the company did recently confirm the Model 3 would have self-driving hardware, which would also allow further control of the vehicle using an iPhone.

As for Apple’s self-driving car project, “Project Titan” has reportedly has been scaled down, but is still reportedly developing a car operating system in Kanata, near BlackBerry’s QNX division.