As predicted by CEO Elon Musk, the Tesla Model 3 has the lowest probability of injury of any car ever tested by the National Highway Traffic Safety Administration (NHTSA).

That’s according to a new blog post from the American automotive and energy company, which explains that the Model 3 in single-motor, long-range spec has the lowest “probability of injury” of any vehicle. The statistic, which comes from the NHTSA, evidently shows that Model 3 occupants have a lower likelihood of being injured in multiple types of crashes (front, side and rollover) than any other vehicle.

Since 1979, the regulatory body has implemented the New Car Assessment Program (NCAP) which, through a series of tests, ultimately produces a rating for a new-to-market vehicle based on how well it performs in a variety of safety-related tests. Over time the test has evolved to assess the injury to occupants based on data gathered for front, side, and rollover crashes.

During the NHTSA’s previous tests of Tesla vehicles, the Model S and Model X, respectively, became the two vehicles with the lowest probability for injury, outpacing all other automakers. The Model 3 has now widened that gap as it takes the new number-one position on the leaderboard for the safest overall vehicle for occupants. 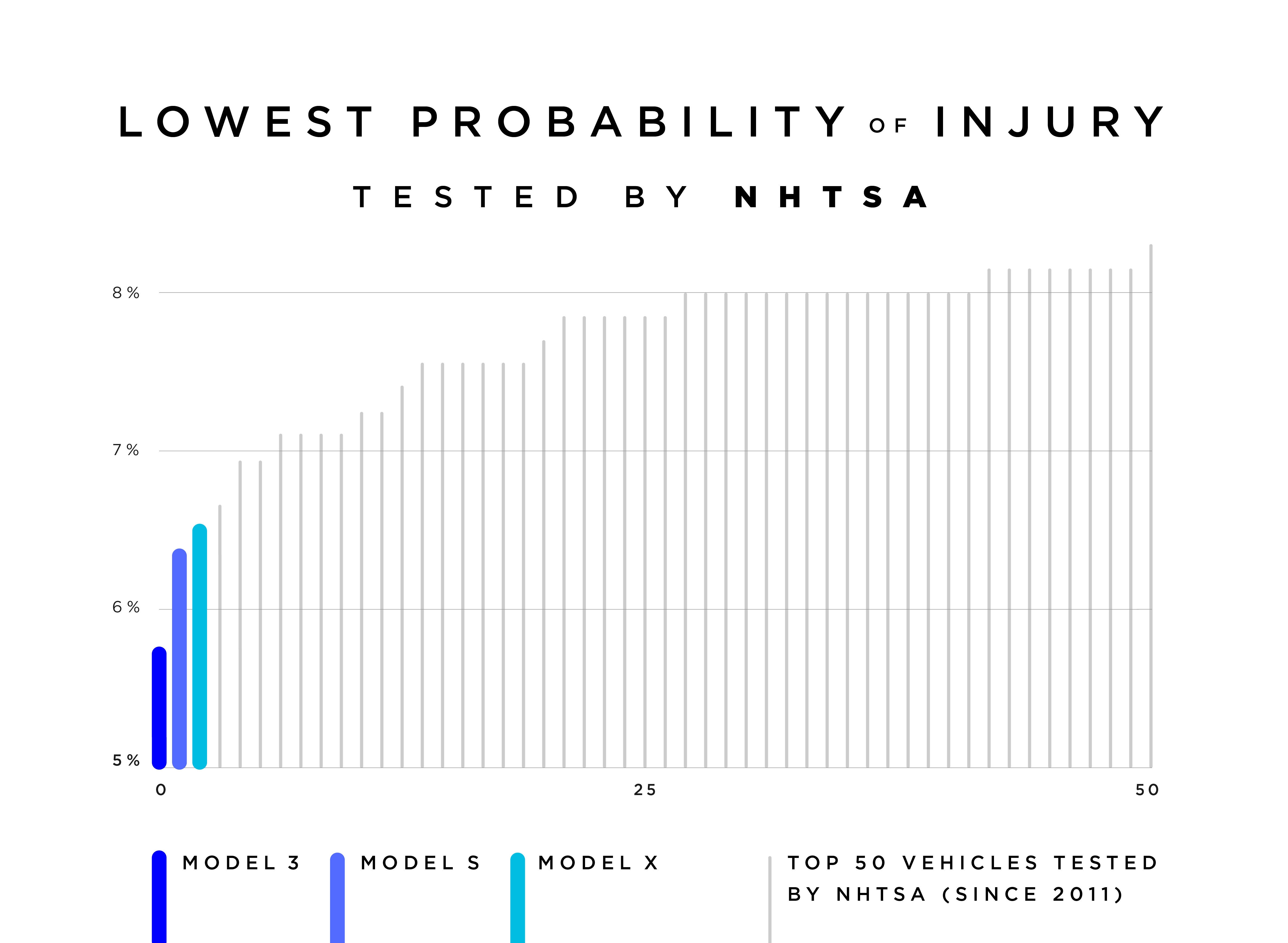 In the blog post, Tesla explained how the Model 3 achieved this unprecedented level of safety:

In addition to its near 50/50 weight distribution, Model 3 was also designed with an extremely low polar moment of inertia, which means that its heaviest components are located closer to the car’s center of gravity. Even though Model 3 has no engine, its performance is similar to what’s described as a “mid-engine car” due to its centered battery pack (the heaviest component of the car) and the fact that Model 3’s rear motor is placed slightly in front of the rear axle rather than behind it. Not only does this architecture add to the overall agility and handling of the car, it also improves the capability of stability control by minimizing rotational kinetic energy.

“Many companies try to build cars that perform well in crash tests, and every car company claims their vehicles are safe,” states the carmaker. “But when a crash happens in real life, these test results show that if you are driving a Tesla, you have the best chance of avoiding serious injury.”

If you’re into automotive engineering, make sure to read Tesla’s blog post in full over at their website. The automaker lists a number of examples of why its vehicle fares so well in crash tests, including side-by-side comparisons and crumple-zone renderings.