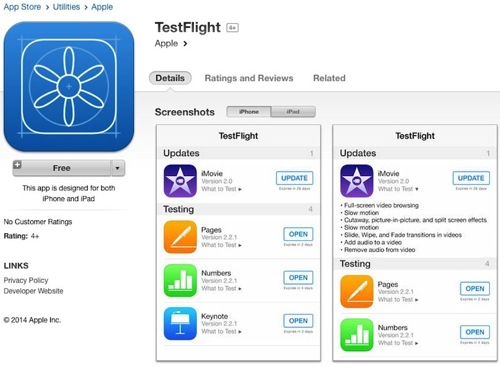 The revamped iTunes Connect web portal, which was previewed by Apple at WWDC back in June, has gone live today, as part of a series of changes that will be rolled out most likely in conjunction with the introduction of iOS 8. As pointed out by MacRumors, the service also includes references to TestFlight with an App Store link [US only] to a universal iOS app, which allows users to install beta apps.

“TestFlight allows app developers to invite you to beta test their apps on your iPhone, iPad, or iPod touch. Once you join a developer’s beta test through their email invitation, TestFlight makes it easy to install or update to new bet versions as they become available.

– To receive your beta test invitation, all an app developer needs is your email address

– You will receive beta invitations in your inbox

– Accept the invitation to open TestFlight and install the app

– TestFlight will then notify you when new versions are available

– Tap to upgrade to the latest version and keep testing”

Back in February, Apple acquired Burstly, the company behind TestFlight, which is one of the most popular beta testing platforms for iOS.