My follow up post was regarding the Vancouver Sun’s coverage of the company, about how there have been many cases where people have not received their iPhones. This woman is out $3000…it’s quite unfortunate. No charges have been laid in the case, but it’s good to know that the authorities are investigating this heavily.

Recently, iPhoneNow.ca’s website changed and only a message appears, stating that the “sales” have been suspended. Users who paid for an iPhone and did not receive it will receive a refund. Check out the following screenshot: 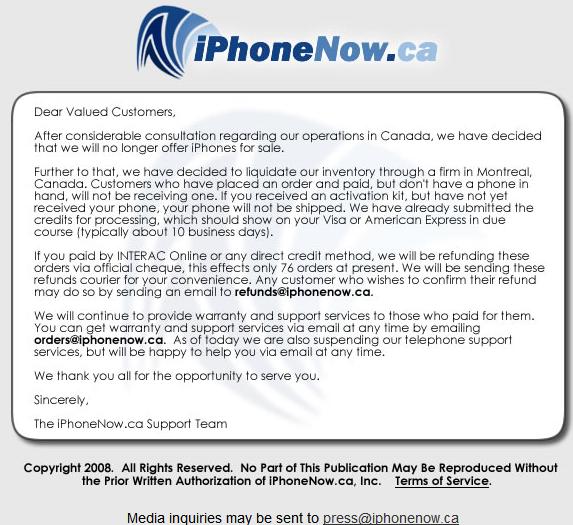 I know lots of people out there that paid for an iPhone and did not receive it are steaming mad–hey, I would be too! But instead of getting angry, I think we should take a step back and try to learn from our experience here. Be more wary of buying online, especially high-ticket items that are in high demand. If it sounds too good to be true, it probably is. It’s unfortunate these things happen in the world today, but when it comes to purchasing online it pays to be extra vigilant. I’ve been a victim of fraud online too so I know how you feel. Sorry if I sound like I’m preaching, just giving my 2 cents! 😉