An incredibly rare pair of authentic Apple branded sneakers from 1990s is going up for auction this weekend, as part of a Beverly Hills auction titled “The Future is Now” by Heritage Auctions. Expected to sell for over US $30,000, the sneakers will be auctioned on June 11, alongside an assortment of “sneakers, surfboards, skateboard decks and street art” (via Cult of Mac). 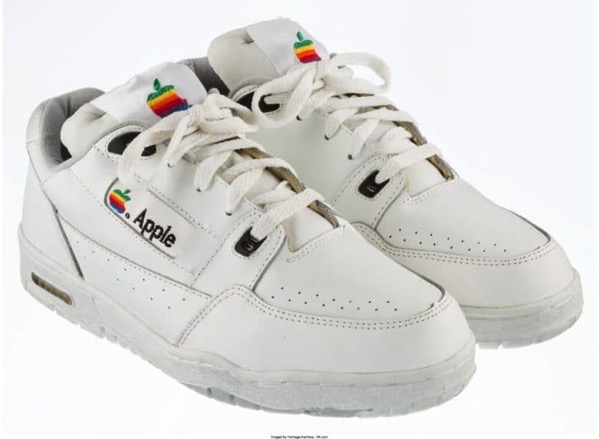 It seems that at one point, Apple almost entered the sneaker business, which is a lesser known fact from the crazy “bad old days” of Apple in the 1990s. The source notes that coming at around the same time, the then-ailing Cupertino company attempted to branch out into everything from video game consoles to restaurants, the shoes were an oddball collaboration with Adidas.

This was around the the point that Apple experimented with other wearables, including some hilarious dated fashion apparel and a promotional Apple watch (yes, an Apple watch before the Apple Watch!)

For whatever reason, Apple cancelled the idea and a prototype of the shoes were sold off to an Apple employee. It’s not known how many pairs exist in total, but I’ve only ever heard about one or two. For that reason, the organizers of the “The Future is Now” auction are expecting a purchase price of around $30k.

Are you prepared to remortgage your home to bid on these?